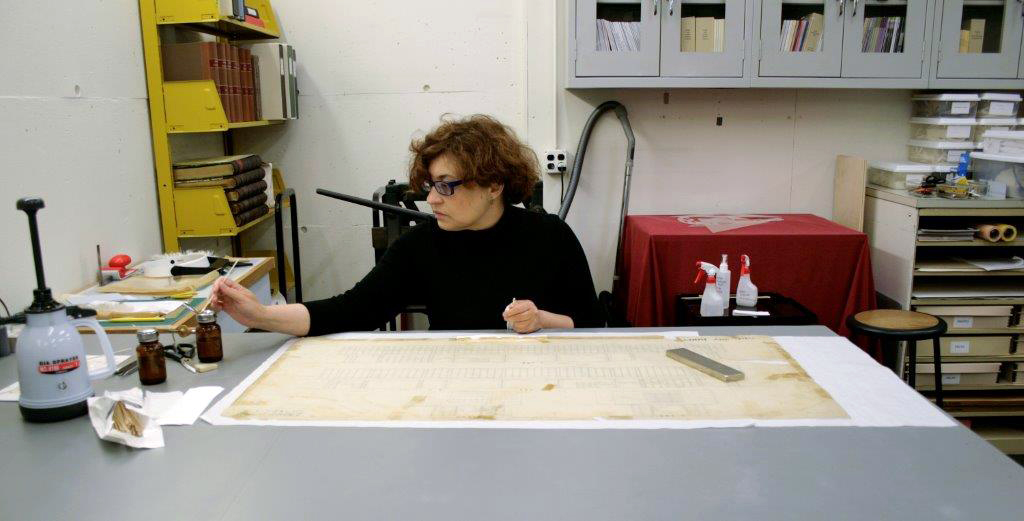 With 18.9 million volumes in more than 70 locations, the Harvard Library is the largest university library in the world and, after the Library of Congress and the Boston Public Library, the third largest library of any kind in the United States. In addition to books, its collection includes maps, musical scores, photographs, prints, and recordings.

To ensure the longevity and broad accessibility of this vast collection, the Weissman Preservation Center, Harvard Library’s special collections conservation lab, employs a team of book and document conservators including Irina Gorstein BB ’98, Conservator for Special Collections based at the Graduate School of Design, and Anne McLain BB ’10, Book Conservation Technician based at Widener Library.

A native of the former Soviet Union, Irina studied library science at the Saint Petersburg State University of Culture and Arts. She left the U.S.S.R. to come to the U.S. in 1989, first settling in Minneapolis.

“I moved to Boston in May 1991, and found my first job at Harvard within two weeks,” recalls Irina. “It was all basically an accident. I had just arrived when a friend told me about an opening at Harvard. I could transliterate Russian into Roman letters so I was hired to work on a project at the Law Library involving a pre-Soviet collection of law and jurisprudence literature,” recalls Irina.

It was at this time that Irina met Dorothy Africa BB ’93, then a Conservator at Harvard Law School, who taught her how to make clam shell and phase boxes. With Dorothy’s encouragement, Irina entered the North Bennet Street School Bookbinding Program in 1996.

“We make it possible for students and researchers to consult primary images. We digitize images for online use, but most people want to see the original pieces in person,” says Irina. “We also prepare and send architectural drawings for exhibition all over the world.”

“We were in the basement of the old building. It was very cramped, but I enjoyed every part of it. It was very collaborative. We learned how to make brass clasps from Jewelry students, and the woodworkers were very helpful, too.

“I learned everything I know from my instructor, Sally Key. She showed me that historic book structures are three dimensional so you have to take an engineering approach to them, and I was drawn to that,” says Irina.

Irina had a traditional library degree, but says she knew what she really wanted to do was work with her hands. Assigned to the Frances Loeb Library of the Graduate School of Design, her work involves mending, humidifying, and flattening paper architectural drawings and tracing paper.

“We make it possible for students and researchers to consult primary images. We digitize images for online use, but most people want to see the original pieces in person,” says Irina. “We also prepare and send architectural drawings for exhibition all over the world.”

While her work may focus on document conservation and preservation, Irina also remains active in bookbinding. “I try to do a couple of leather re-bindings a year to keep up my hand skills. I also teach a two-day seminar each January for our architecture students. That gives me great pleasure, too, because architects understand structure like no one else,” she says. 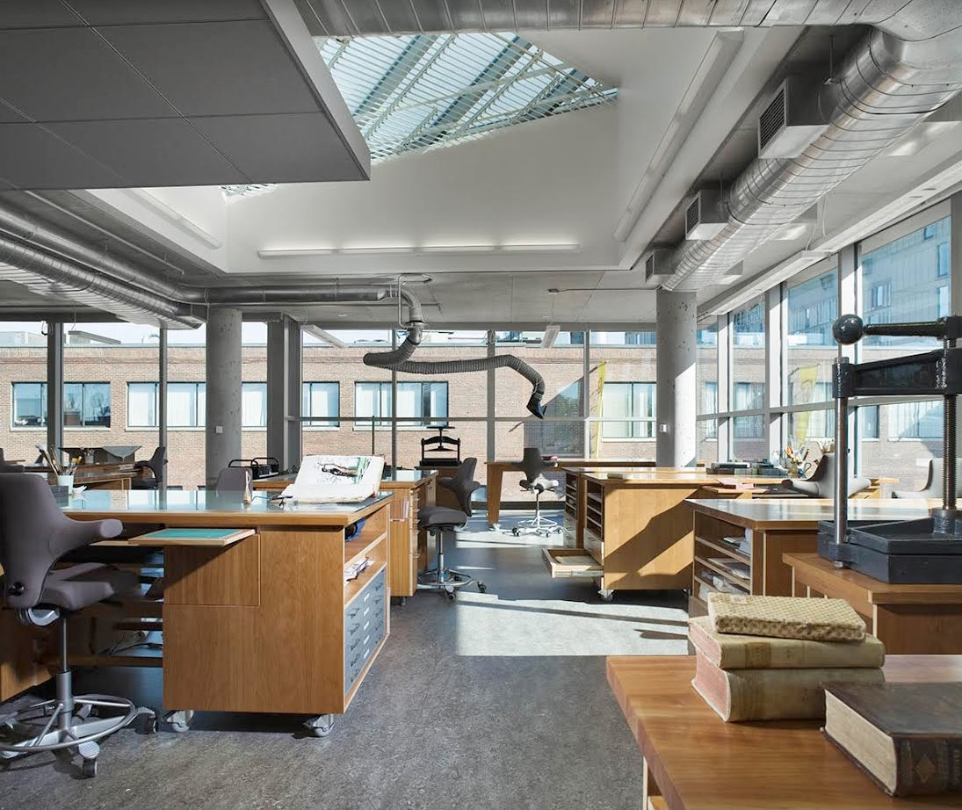 An Ohio native, Anne is a graduate of the University of Cincinnati, where she earned a degree in interior design. “I didn’t stay in interior design after graduating. I had always loved books so I ended up working in bookstores, a move that was supposed to be temporary,” remembers Anne.

It was another interest, however, that first drew Anne to NBSS.

“I heard about the Violin Making & Repair program from a friend of a friend. I had played the viola when I was in grade school and was intrigued, so I called the school for a catalogue,” says Anne. “One of the first things I noticed was a section on the Bookbinding program. I later returned to Ohio for a couple of years, taking workshops regionally and finally flying back to Boston for a workshop at NBSS and a tour.”

Like Irina, Anne has indelible memories of the School. “The old building was so creaky. It felt like Santa’s Workshop on steroids. It was a whole building full of purposeful people working on meaningful projects – I’d never seen anything like it before. I thought, ‘I have to do this.'” Anne enrolled at NBSS in 2008.

“I was interested in both bookbinding and book conservation, but the stronger interest was in making, so I chose NBSS over a program that was strictly conservation,” she recalls.

Bookbinding Instructor Martha Kearsley BB ’96 explains, “What we teach is best practices in conservation repair. And that skill set is taught and learned pretty much the same way as every other topic in the program: with an emphasis on deep knowledge of structure and materials, and the development of hand skills through repetition.”

“We have strong hand skills as a result of two years of solid bench work. Everything I do every day at work is something I learned at NBSS, whether it’s paper repair, or rebacking, resewing, or recasing a book,” adds Anne. “I do also stay active in the book community and keep all my other learned skills from getting rusty by doing my own work and entering design bindings in exhibits.”

“I can spend a whole day rebinding 1950s textbooks or pamphlets or repairing a foldout map in a book and the next day be working on something completely different from the 19th century,” says Anne.

“I was fortunate to have amazing classmates and we benefited from having Jeff Altepeter [BB ’99] as our Department Head. He was great about bringing in outside people from the field with a wide range of strengths and specialties. He always made sure we got more than one viewpoint,” explains Anne. “Both Martha’s and Jeff’s business experience in binding and conservation repair, proved invaluable as well”. Anne, who is based at the Harry Elkins Widener Library in Harvard Yard, says after two recent weeks spent working on a computer she couldn’t wait to return to business as usual.

“I can spend a whole day rebinding 1950s textbooks or pamphlets or repairing a foldout map in a book and the next day be working on something completely different from the 19th century,” says Anne, whose colleagues include Katherine Westermann Gray BB ’09 and Annmarie Ostrowski BB ’01.

“Books sometimes come to us all but falling apart,” says Anne. “To see the books leave sound and usable for patrons again gives you great satisfaction. It’s very rewarding to help keep books accessible and in circulation, especially in this age of digitization. Physical books still have their place.”