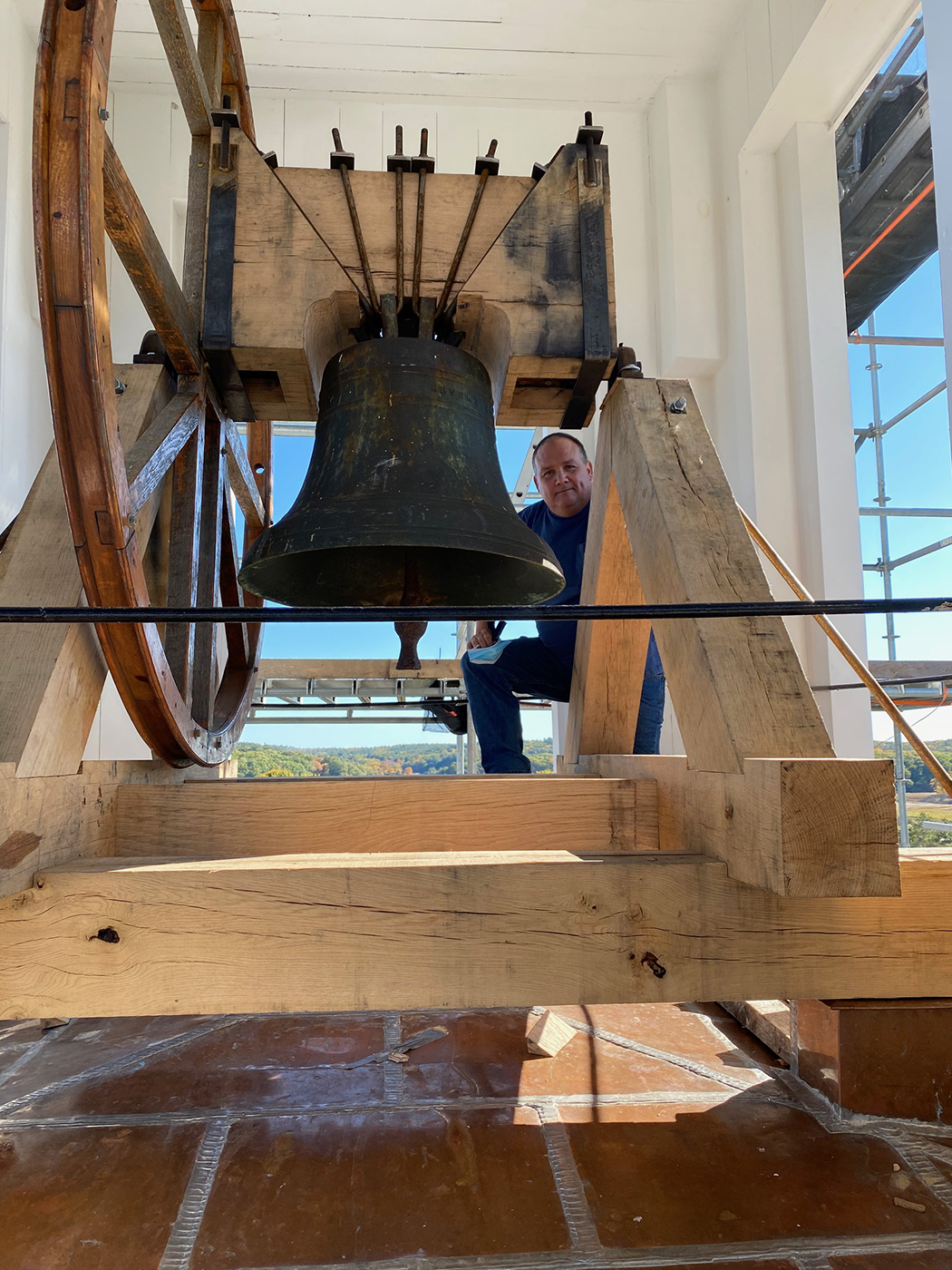 Steve Brown CF ’90 couldn’t make a large donation to his church to help repair its steeple. So he gave something just as important: his time and woodworking experience.

Steve is a trustee and longtime member at the historic First Congregational Church of Essex. He’s also a woodworker, an instructor in our Cabinet & Furniture Making program, and a 1990 graduate of the same program.

Due to water damage, the church’s steeple had become unstable, and leadership made the difficult decision in 2017 to quit ringing the 827-pound bell. “We didn’t want the tower to go sideways or the bell to go south, both of which might have happened!” said the church’s pastor, Rev. Dr. Timothy Ziegenhals, with a laugh.

And this wasn’t just any bell, either. It was cast in 1797 at Paul Revere’s foundry in Boston’s North End, made from blending silver dollars, silver spoons, and jewelry contributed from people in the parish. According to the church, this bell is the fourth oldest Revere Bell still operational. “The project has this significant historic aspect to it,” Steve said. “Just knowing I played a part is very cool. I feel like I was given a great opportunity.”

Steve’s role was to build the 10-piece timber-frame cradle that holds the bell inside the steeple’s belfry. He had never done timber framing before, but he realized it was a lot like furniture making, albeit on a much larger scale.

Steve, who lives in Manchester, built the cradle in his driveway over the course of three weeks this summer using locally-sourced green white oak. “The pieces were only harvested the week before,” he said. “So they were very heavy.” He used an electric drill to rough out mortises, as well as a circular saw and a handsaw. But much of the work required labor-intensive chiseling. “It gave me a real appreciation for people who do timber framing professionally,” he said.

The reverend said Steve drew inspiration from Bezalel, an Old Testament craftsman who designed and oversaw the making of the tabernacle in the book of Exodus. “He’s one of Steve’s Biblical heroes,” Ziegenhals said.

The First Congregational Church has been offering spiritual encouragement and guidance to the Cape Ann community since 1683, and its meeting house served as the town hall until 1894. The current building was finished in 1792. In the past, the bell rang six times a day, marking time for shipyards, farms, schools, and homes. It also knelled the deaths of presidents Washington, Coolidge, and Lincoln. More recently, it rang to call worshippers to service and to commemorate weddings, funerals, and the midnight arrival of Christmas.

Arron Sturgis of Preservation Timber Framing in Maine served as lead contractor on the steeple restoration. The crew—half of which is made up of NBSS Preservation Carpentry graduates—installed new support beams, a new ladder, and supervised the replacement of the copper roof.

Sometime after its original construction, the church covered the belfry with louvered panels, Steve said. The restoration will leave the belfry open, and lights will shine upon the bell so that it’s visible at night.

The church recently assembled the cradle on site, and used a crane to lift the heavy timber pieces into the belfry. The whole project should wrap up by mid-November. The reverend predicted that hearing the bell come alive again for the first time in three years will bring a sense of relief and gratitude.

“We could have gone on being the church without the bell,” he said. “We could have knocked the steeple down. But there is a sense of history. We are stewards of this building and partners in what it represents to the town.”