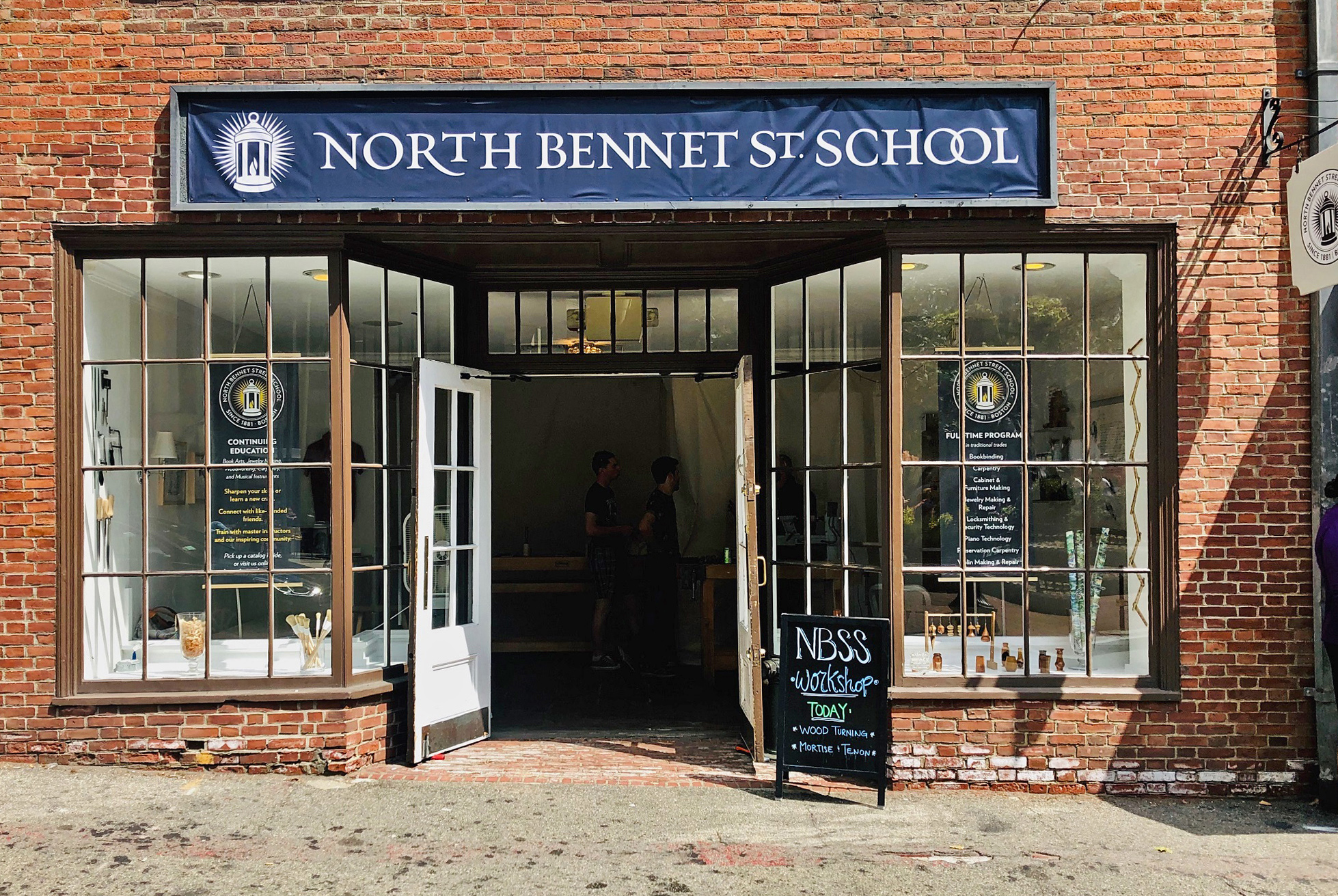 Located at 11 School Street and operating weekdays from 11am-2pm, the NBSS pop-up workshop has attracted dozens of downtown workers on lunch breaks, and more than a handful of curious tourists. They marvel at live demos of wood marquetry, paper marbling, bowl turning, and other such activities performed by NBSS artisans. The storefront space was designed as a respite from the buzz of the office, and many guests have enjoyed what they view as the “low-tech lunch” experience.

“When you walk into the pop-up workshop there’s this feeling of an immediate slow down. When you’re able to be quiet and to focus, time just moves differently,” according to Kristen Odle, NBSS Retail & Exhibit Manager. “One person shared how grateful he was just to ‘look at something other than a spreadsheet’ during his lunch break, and how refreshed he felt upon leaving.”

This isn’t the first time HBI has generously offered temporary retail space to NBSS. In 2013, the School exhibited handmade furniture, books, jewelry, and even a grand piano in The Old Corner Bookstore as part of their Annual Celebration of Craft. The current pop-up space is actually part of that same historic structure, which holds the title of Boston’s oldest commercial building. Built in 1718 as a doctor’s apothecary shop, The Old Corner Bookstore later housed Ticknor and Fields, publishers of many well-known American titles, and the origin of its current moniker.

When the building was threatened by demolition for a parking garage in the 1960’s, a group of Bostonians formed Historic Boston Incorporated (HBI). The organization rescued and revitalized the property, and today the building remains an indelible feature of the Downtown Crossing neighborhood. HBI has flourished in the intervening years too, their success exemplified by over two dozen projects that preserve Boston historic architecture and heritage.

NBSS has partnered with HBI on multiple projects over the years, including the First Parish Church in Dorchester, Eustis Street Firehouse in Roxbury, and most recently, the acclaimed Fowler Clark Epstein Farm in Mattapan. In each of these projects, NBSS faculty and students applied their expertise to the historic sites—whether by researching building plans or other archival documents, analyzing the time-honored methods of construction, recreating architectural features, or restoring significant portions of the building components. These projects greatly add to the student experience, and help to preserve and enhance our communities as well.

The NBSS Pop-Up Workshop is located at 11 School Street in Boston, and open weekdays from 11am to 2pm through Friday, November 8, 2019. Guests can stop by to view demonstrations in woodworking and bookbinding, learn more about the School’s programs and classes, or simply enjoy their lunch break free from the buzz of the outside world.