NBSS was hired by the Governor’s office to create furniture for the State House restoration — an armoire for the Governor’s Council chamber and a pair of library tables. NBSS President Miguel Gómez-Ibáñez CF ’99 engaged a group of graduates, including Eli Cleveland CF ’09 and Richard Oedel CF ’05, to make the pieces.

This new table is a replica of the original H.H. Richardson table. 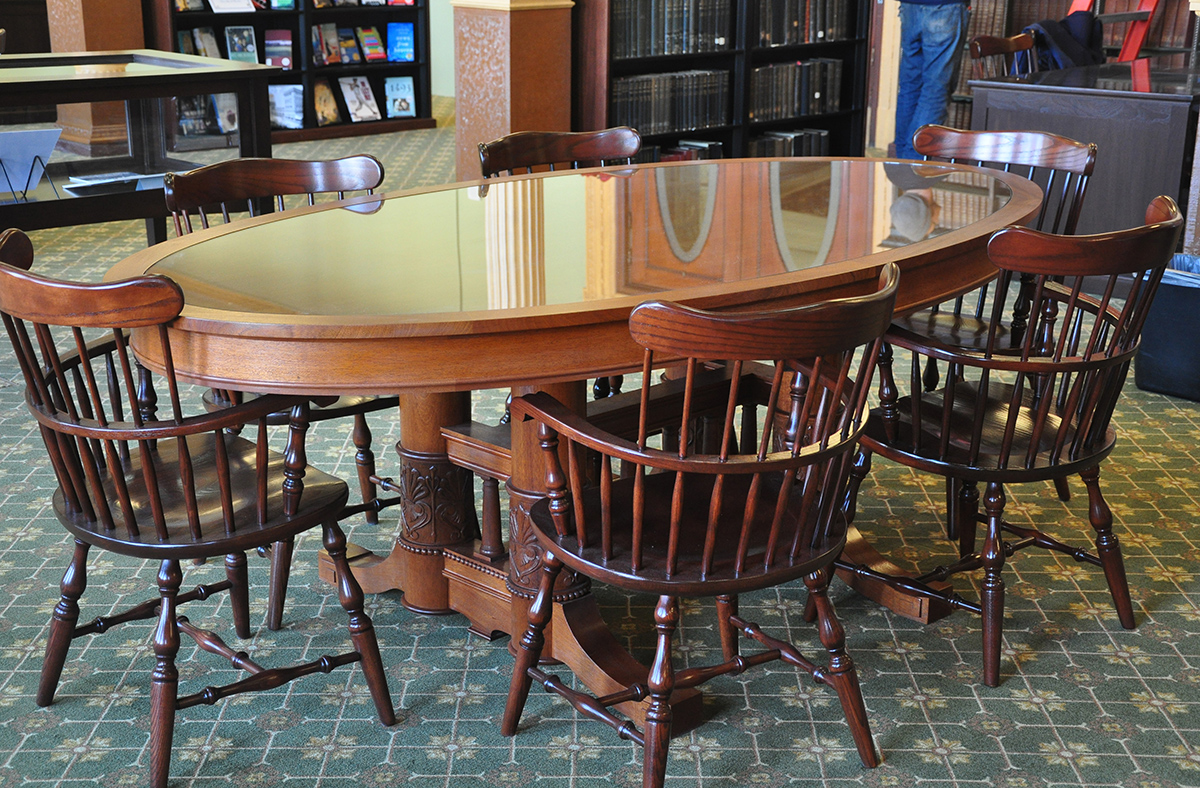 Richard Oedel CF ’05 led the team making the tables. The job included restoring an original table made by H. H. Richardson in the 1890s and adjusting the height to meet ADA accessibility. The state house also asked for a second new oval table to replicate the original in every aspect and be ADA accessible and a third, also new, round table, with a leather top that would use the same design inspirations of the original.

Richard notes about the project, “It was a major project to bring all of this together in 6 weeks… the work included several hundred carved details and columns, and posts and feet that were built to withstand daily, heavy use.” The materials used mirrored the originals—primarily mahogany. The joinery techniques on the lower section of the new tables are dramatically improved over the originals. The round table is a completely new design and the leather was matched to the leather on the top of the Governor’s desk. Working with Richard were Alex Krutsky CF ’81, Matt Huffman CF ’09, Dwayne Bailey CF ’06, Greg Brown CF ’10, Heather Dawson, and Nick Ventola.

Eli Cleveland CF ’09 tackled the replacement of an existing mahogany breakfront to accommodate modern equipment including a large TV and other equipment needed for presentations and video conferencing. To create something that would fit in the historic room, Eli drew both literally and conceptually from the original. The dimensions and some details changed but others, including the lower doors, a similar approach to the upper doors and a carved crown molding closely match the original.

The reputation of NBSS as a school that teaches period furniture making and the strong network of graduates who stay connected to the school make projects such as these possible and continue the rich history of Massachusetts furniture makers into the future.

“It was a major project to bring all of this together in 6 weeks… the work included several hundred carved details and columns, and posts and feet that were built to withstand daily, heavy use.”

This story is part of the Spring 2015 issue of Benchmarks magazine. See more Benchmarks issues here, or download a pdf of the entire issue.