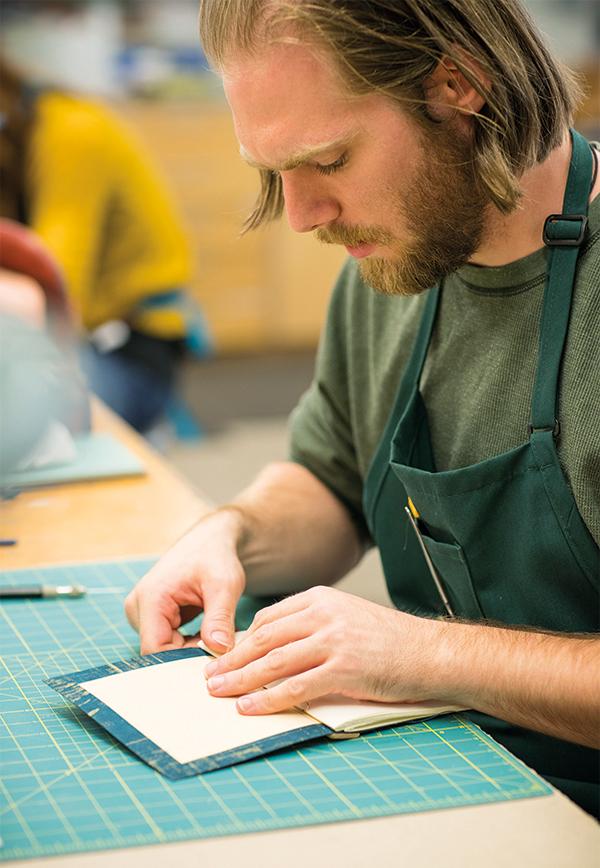 The School was a mecca this year for professional bookbinders and collectors of fine and design binding, thanks to not one but two traveling bookbinding exhibits.

The New York-based Guild of Book Workers presented Vessel during the summer of 2016 at NBSS, and in the following summer of 2017, the Colorado-based American Academy of Bookbinding (AAB) presented Open • Set.

“Exhibitions are an important part of the field, giving bookbinders a chance to show off their chops. And hosting these kinds of exhibits is a great way to connect our students and alumni to new opportunities because they provide fantastic exposure. Exhibits are also a great chance for them to be inspired,” explains Bookbinding (BB) Department Head and instructor Jeff Altepeter BB ’99.

A juried exhibit where everyone worked on a theme but not a specific volume, Vessel ultimately included 50 pieces of book art. NBSS was represented in the exhibit by Erin Fletcher BB ’07, Monica Holtsclaw BB ’08, and Colin Urbina BB ’11.

“I decided to enter Voyaging Southward from the Strait of Magellan, by Rockwell Kent. I come from a sailing family and spent a good portion of my youth growing up on a boat.

“I took my inspiration for the binding from the rigging of ships. My design involved a series of lines that represented not only rigging, but also rippling water, and navigational lines. The binding has a teak wood inlay, a traditional material in ship construction,” explains Colin. 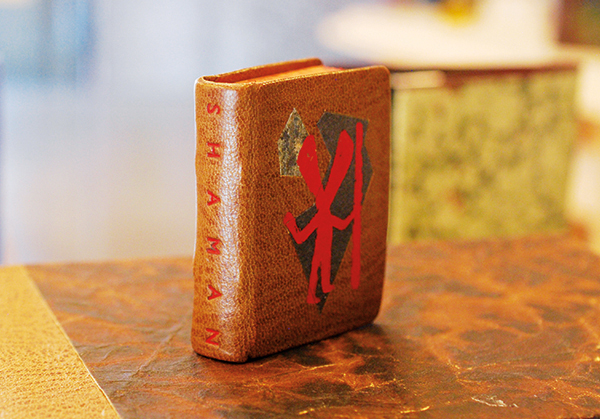 For Open • Set, fine design bindings created by bookbinders from all over the world were divided in two categories. Entrants could choose to bind a book of their own choosing in the “Open” category or bind the preselected “Set” option, the novel Inside the Book by David Esslemont. NBSS was represented in Open • Set by Gabrielle Cooksey BB’14, Samuel Feinstein BB ’12, Jackie Scott BB ’15, Colin Urbina BB ’11, and former NBSS instructor Mark Esser. Samuel won Highly Commendable recognition in the Set category for his tooling work, while Mark took First Place in the Open category.

“The book I chose was An Alphabet, which includes wood engravings by Barry Moser and letters based on the calligraphy of Yvette Rutledge,” explains Mark. “I took a detail from the calligraphic alphabet that appears on the title page of the book and magnified it for my design. The cover is full-leather grey goatskin with orange goatskin onlays.”

“These exhibits demonstrate that there is growing interest in finely crafted design bindings in the U.S. We want to build on that understanding. Fine and design binders are akin to oil painters, but instead of a canvas, we use a book cover. Each binding is entirely unique.”

“When [AAB Advisory Board member] Lang Ingalls told me how well my work had done in the juried competition, I was floored. I thought it was a good binding, but I never expected it to win,” says Mark, now a Newton-based bookbinder and conservator.

Lang shares that she developed the idea for Open • Set as a way of increasing public awareness of fine and design binding. “In the U.S., books are about their stories, not their covers. The books available in stores are all machine made. In Europe and Asia, however, there are professional bookbinders everywhere,”says Lang.

“These exhibits demonstrate that there is growing interest in finely crafted design bindings in the U.S. We want to build on that understanding,” she shares. “Fine and design binders are akin to oil painters, but instead of a canvas, we use a book cover. Each binding is entirely unique.”