Continuing Education as a Path to Success

Heather Dawson, a recent graduate of the joint North Bennet Street School and MassArt furniture design certificate program created a path to furniture making through the Continuing Education programs of both schools. She is thrilled with the option that allowed her to do what she loves and, when asked to share her story, she responded enthusiastically. 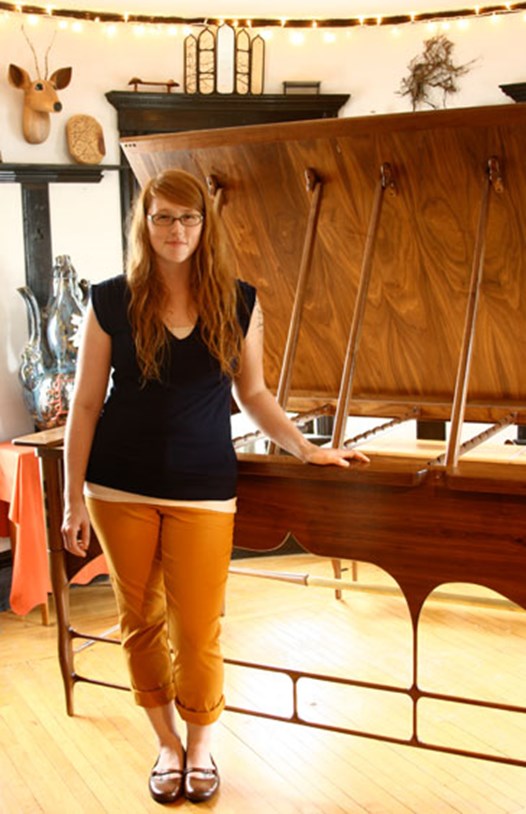 I was unhappily working in the finance industry when I decided to go to trade school. I had studied biology at UMass Amherst many years earlier, but I withdrew after just one year. I needed a more practical education. I wanted to work with my hands, express myself creatively, and get paid to do it. I had always loved working in my father’s woodshop and I’d been a pyrography hobbyist for a few years. It was a natural choice to study fine woodworking.

I started taking workshops and private lessons with Brian Mulcahy at the New England School of Architectural Woodworking in 2010. That year, I applied for North Bennet Street School’s full-time Cabinet & Furniture Making program and was accepted. Unfortunately, I had to decline the opportunity. I couldn’t afford the tuition, and the rigorous daytime class schedule meant that I would have to leave my full-time job. I decided I would apply for scholarships and try again the following year.

North Bennet Street School has a partnership with Bunker Hill Community College (BHCC) for a degree in Craft Entrepreneurship. Instead of trade school, I enrolled at BHCC to learn how to start a small business.

That winter, a new certificate program in Furniture Design was introduced as a collaboration between NBSS and MassArt. It was perfect for me. The program would teach students the skills they would need to work in the field or to become independent studio furniture makers. It was affordable, financial aid was available, and night and weekend classes would give me the chance to work during the day. I found out later that BHCC would accept credits earned in the new program toward their Craft Entrepreneurship degree. Right away, I enrolled in the two prerequisite workshops at North Bennet Street School.

Over the next three years, I took many workshops through continuing education at NBSS. Some were required for the certificate program, but others were just for fun and to improve my skills. I even won a grant from the Furniture Society to take one. My workshop instructors Matt Wajda and Ellen Kaspern became close friends and valuable mentors. In fact, I had received such incredible mentorship from the continuing education teachers at both MassArt and NBSS that I wanted to give back somehow. I realized my own desire to teach woodworking on a community level. In my last year in the certificate program, I proposed an independent study course which would involve assistant teaching a workshop. Through this course, I assisted Brian Vogt’s Cabinetmaking class last fall. Earlier this year, I also assisted Ellen Kaspern’s Fundamentals of Machine Woodworking class.

Equipped with new knowledge and skills, I was able to step away from my desk job and start a woodworking career. While still in school, I apprenticed with master cabinetmaker, Gary Barcus in Norwood, Massachusetts and studied independently with Matt Wajda and Mitch Ryerson (a MassArt professor, designer, and master builder) in their professional shops. Last year, I was offered a position with Richard Oedel at Fort Point Cabinetmakers, where I now work as a professional journeyman.

I think often about the NBSS slogan. “Do what you love every day.” Believe me, I’m doing it, and it’s all because of continuing education. Because I was able to find an affordable, convenient, and comprehensive education in woodworking, I can finally make an honest living doing something that makes me proud, something that I really love.