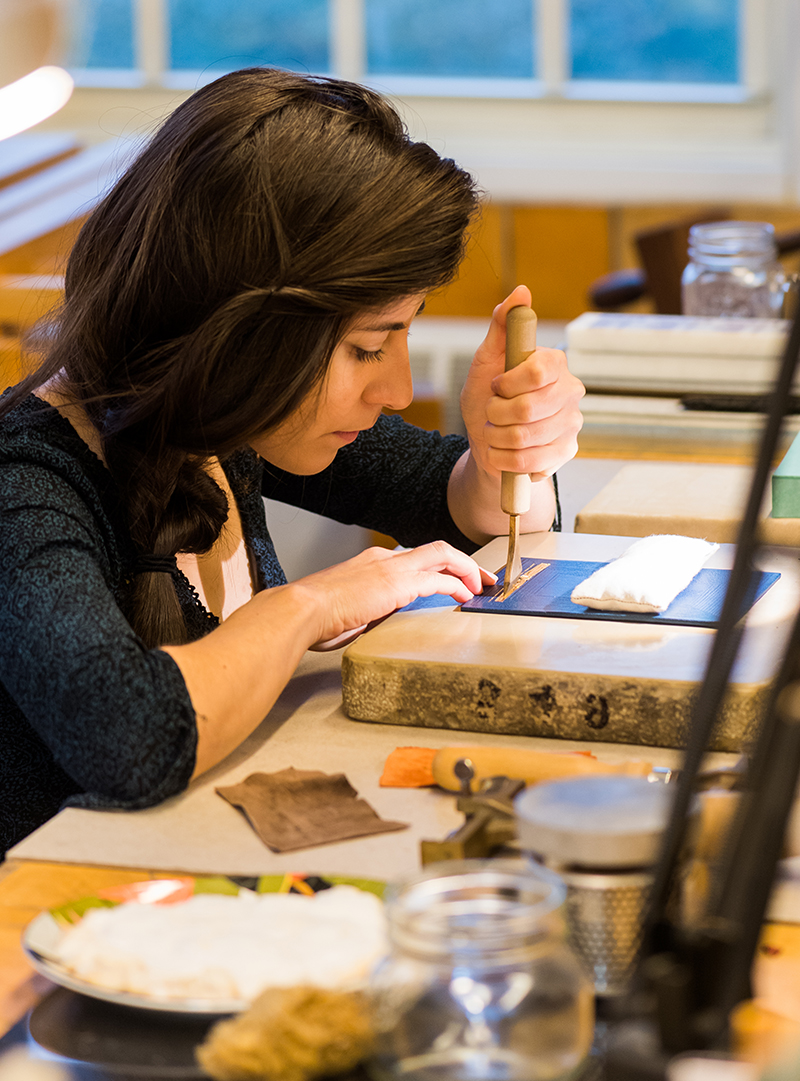 Bookbinder, collector, exhibit organizer, and philanthropist Louisa “Lisa” Hunnewell von Clemm was a supportive, encouraging member of the NBSS Board of Directors for over 25 years.

Though she passed away in 2016, her considerable impact on the School continues to be felt in meaningful ways, including the new Lisa von Clemm Scholarship established this year in her memory.

The Scholarship is specifically intended for Bookbinding students. As an endowed, need-based fund, it will ensure the program continues to thrive for years to come.

“This kind of support is very important because bookbinding training is expensive. Scholarship assistance is critical for students. And one of the fantastic things about this scholarship is that it would have been really dear to Lisa’s heart,” explains Bookbinding Department Head and Instructor Jeff Altepeter BB ’99. “Lisa gave NBSS and the Bookbinding program not only financial, but also emotional support. She helped organize trips to England so students could view amazing collections, visit with suppliers, and meet colleagues at industry events. Lisa and her daughter Stefanie von Clemm [current NBSS Board Member] even hosted students at Lisa’s home in London.”

It was while living in London that Lisa began a more than 30-year association with the U.K.-based Designer Bookbinders, a membership organization committed to promoting the craft of fine British bookbinding through worldwide exhibitions and publications. After winning a Designer Bookbinders competition, Lisa went on to run the organization’s Annual Competition for many years, according to Simon Eccles, a book collector, exhibition promoter, and U.K. native who now divides his time between Boston and Williamsburg, Virginia.

“This kind of support is very important because bookbinding training is expensive. Scholarship assistance is critical for students. And one of the fantastic things about this scholarship is that it would have been really dear to Lisa’s heart.”

Simon initially got involved with Designer Bookbinders in 2001, at Lisa’s invitation. “I bought my first design bookbinding at the show. Lisa told me that I was buying a good book – but I was paying too much,” says Simon with a laugh. “I share that story with great affection, because I know that Lisa’s many good friends will recognize her in it.”

The pair’s friendship evolved further on a shared trip to Boston. “We brought the international exhibit, Bound for Success, to the Boston Public Library in September 2009, and at that time we began to talk at length about the craft and about NBSS. By August 2015, when I was finally living full-time in the U.S., the School became one of my primary interests.

“It is a truly remarkable place and I don’t believe there is any better bookbinding program. It’s a success story in itself, but like all programs it is in need of scholarship support,” explains Simon, who now serves on the NBSS Board of Advisors.

Simon had that in mind when he helped organize a fundraiser for the new Lisa von Clemm Scholarship in conjunction with Heroic Works, the Designer Bookbinders third international exhibition which was presented at NBSS in fall 2017. “This scholarship is exactly what Lisa would want as her legacy. She would be behind it 100 percent. When Lisa believed in something, she was there for it fully,” says Simon.

As a Hunnewell, Lisa’s connection to NBSS was longstanding. It was Lisa who, in 1999, initiated the “Annual Evening of Craft” at her home on the Hunnewell Estate in Wellesley. She would later host the 10th anniversary of what is now the “Annual Celebration of Craft.”

“Helping to memorialize Lisa with this scholarship is my way of evidencing the importance of North Bennet Street School,” says Simon. “I know my good friend would be very happy about that.”

Learn more about all scholarship opportunities at NBSS.