Engaging the Next Generation 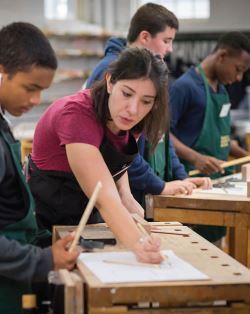 Developing and nurturing the next generation of makers and craft artists is central to the mission of North Bennet Street School. This past October it was the subject of a panel on craft education that I was privileged to moderate at an American Craft Council conference in Omaha, Nebraska.

On the panel were representatives from Rhode Island School of Design and Haystack Mountain School of Crafts, as well as a studio potter and a studio glass artist who learned their craft in lengthy apprenticeships. The panel focused on the need to open craft schools—and the field itself—to a wider audience. One that better reflects the diverse world in which we live.

The cost of a craft education, combined with modest salary expectations upon graduation, are among the most significant barriers to access for many. To address this challenge, we at NBSS recently launched a $20M campaign to fund student scholarships. It’s an ambitious goal, but one that we’re passionate about pursuing.

Affordability is not the only factor limiting access to the field, however. Many young people are simply not aware of the opportunities and rewards vocational training offers. They’ve grown up in an educational environment where success is measured by standardized tests and college acceptance rates. They’ve never been exposed to shop class, or even arts and crafts for that matter. This issue came into focus as part of the conference.

Many young people are simply not aware of the opportunities and rewards vocational training offers. They’ve grown up in an educational environment where success is measured by standardized tests and college acceptance rates. They’ve never been exposed to shop class, or even arts and crafts for that matter.

It’s not simple,” said panel member Mark Shapiro, a studio potter. “It’s one thing to offer scholarships or to have low costs, and it’s another thing to get people to imagine, coming from other places… that this field is for them.”Motivated by this challenge, in 2010 NBSS resumed a manual arts training program for students of the nearby John Eliot K-8 School. These are classes we originally offered to the Boston Public Schools (BPS) in 1885, and then as today, were intended to expose the next generation to hand skill-oriented careers.

This program has been resounding success, and we’re now in the process of bringing it to older students. This past summer, a pilot program provided a pre-vocational course to students from Boston’s Madison Park Technical Vocational High School.

A second and more extensive program is proposed for the Jeremiah E. Burke High School, which serves some of Boston’s most promising youth from Dorchester’s Grove Hall neighborhood. The goal is to provide students with a project-based curriculum that has meaning for them, one that responds to their unique needs and goals.

“We believe that we will create the conditions to innovate by partnering with North Bennet Street School,” says Burke Principal Dr. Lindsa McIntyre. “Our students need a trajectory to success that makes sense to their lived experiences. Building vocational capacity that leads to employment in real time does just that.”

By working with public schools, NBSS is bringing manual arts training to a younger and wider audience—true to our origins as the nation’s first trade school. The value of working at a craft is far from obvious for many, but the early results of these efforts have been heartening. And as the stories in this issue of Benchmarks suggest, the experience of working with one’s hands builds not only a variety of creative skills, but also patience, integrity, and character. I can’t think of a more important pursuit than to share this rewarding path with young lives everyday.

This essay was written by NBSS President Miguel Gómez-Ibáñez and published in the Winter 2017 issue of the School’s newsletter Benchmarks. Read more issues of Benchmarks here.