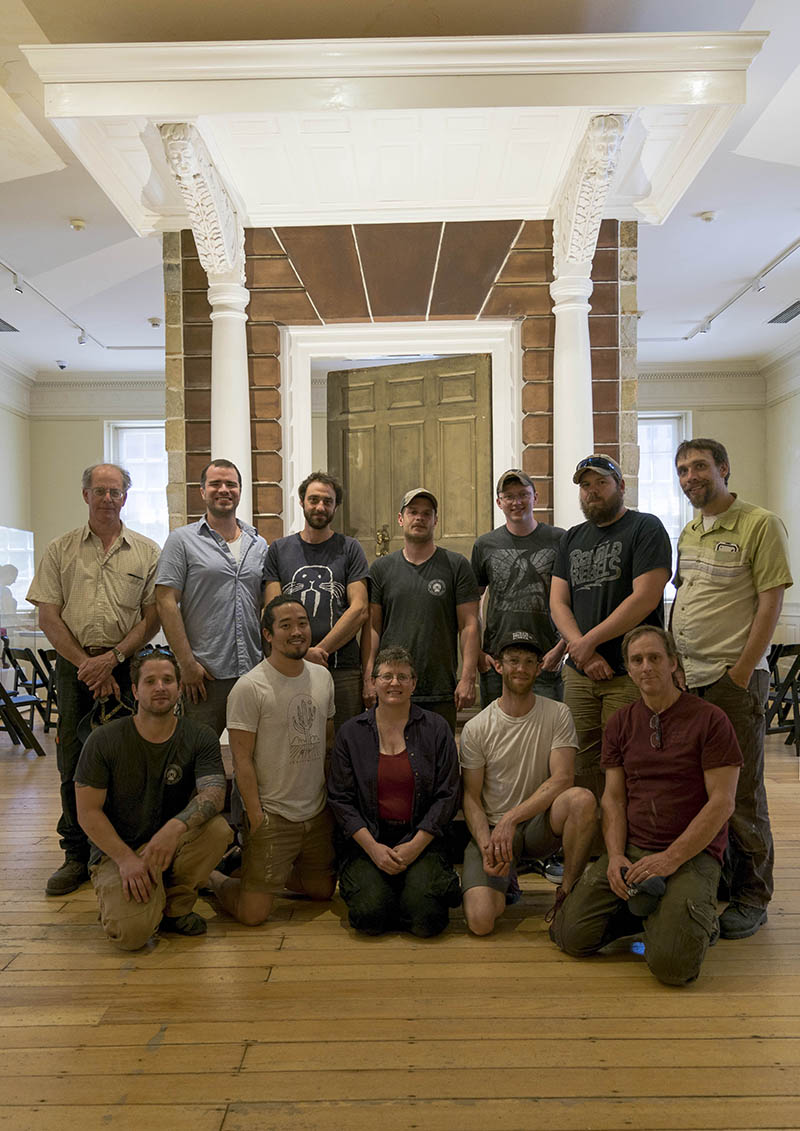 The original front door of the long-gone Hancock Mansion on Beacon Hill recently emerged from storage as the Bostonian Society, its steward, seeks to exhibit the historic artifact at the Old State House.

Students from our Preservation Carpentry program were commissioned to build a full-scale reproduction of the fine Georgian home’s opulent surrounding entryway. The Bostonian Society’s exhibit featuring the installation, “Through the Keyhole,” will open at the Old State House on June 20, 2018.

WBUR’s The Artery covered the story on May 16, 2018, of how the students recreated the structure around the door — using just old photographs and illustrations. “That’s what this door is all about, trying to produce something that’s never been done before,” says one of our students.

The Boston Globe also highlighted the project on May 30, 2018 saying, “John Hancock’s front door is reemerging at Boston’s Old State House as the centerpiece of a new Bostonian Society revitalization project: a re-creation of the original 1737 Hancock House entryway, complete with wallpaper and hand-carved brackets, wood columns, and timber frames.”

WCVB Channel 5 Boston featured the finished project on a Hidden Gems of local history segment, featuring video of our students constructing the door and shots of the completed exhibit.

“We hope to give people today a chance to encounter the Hancock Mansion Door for the first time in decades, and to transport them into the past.”
– Nathaniel Sheidley, Executive Director of the Bostonian Society

Originally built in 1737 by Thomas Hancock, John Hancock’s wealthy uncle, the mansion later became home to his nephew, the first signer of the Declaration of Independence and first and third Governor of the Commonwealth of Massachusetts. A decade after John Hancock’s death, his descendants unsuccessfully offered the home to the state as a governor’s residence. In 1863, the house was razed to make way for new brownstone townhouses, with many of its components auctioned off or given away, scattered throughout New England.

The mansion’s demolition birthed the historic preservation movement in New England and gave rise to organizations like the Bostonian Society, which later went on to save Boston’s Old State House from a similar fate. Pieces of the Hancock Mansion became part of museum collections throughout New England, including a key from the collection of Boston’s Old North Church, which was recently confirmed as belonging to the original door, according to our Locksmithing & Security Technology program.

“We hope to give people today a chance to encounter the Hancock Mansion Door for the first time in decades, and to transport them into the past,” shares Nathaniel Sheidley, Executive Director of the Bostonian Society. “But we also hope to use the door as a metaphor to engage 21st-century audiences in thinking about the barriers that divide us, and the doors that we’d like to see opened in our communities that aren’t open right now.”

The original 12-panel Hancock mansion front door became part of the Bostonian Society collection in the late 19th century, and has been exhibited periodically as a stand-alone artifact. During a transition between storage locations, the Bostonian Society asked NBSS to store the door and construct a custom crate for transportation. This stewardship eventually led to the creation of the current project with our PC program.

This is a perfect skill-building opportunity for our students,” says Steven O’Shaughnessy PC ’99, Preservation Carpentry Department Head. “They’re learning how to research and document a project, in addition to hand and machine skills like turning wood columns, carving brackets, and constructing timber frames. Best of all, they get to collaborate with a dedicated, knowledgeable client in the Bostonian Society.”

The project will be completed in May—in time for National Historic Preservation Month—and exhibited at the Old State House in 2018. Also included in the exhibit will be other items from the Bostonian Society’s collection related to the Hancock Mansion and its inhabitants.

Kathy Mulvaney, Director of Education and Exhibitions at the Bostonian Society, couldn’t be more pleased with the work being performed. “We are thrilled to once again be collaborating with the students, alumni, and faculty of North Bennet Street School. As always, we are amazed by their talent and attention to detail.”

To learn more about the exhibit at the Old State House, visit their website.

View and download a full media kit, including in-progress images.