In the Making: Rebekah Lord Gardiner

Bookbinding, Alumni, In the Making

I know something good will come out of this.

Rebekah Lord Gardiner is an NBSS Bookbinding graduate, a member of the School’s Board of Advisors, and co-owner of Shepard & Maudsleigh Studios, a 25-member printmaking studio / artists space in West Newton, MA.

In this interview with Rebekah, we discuss creating community online, the parallels between makers and scientists, and how, when things may seem bleak in the world right now, it’s also a moment ripe with creative possibility.

Below is an excerpt from the conversation, edited for space and clarity.

Kristen Odle: Hello Rebekah, how are you? And where are you?

KO: Nice. Do you have a bench set up there so you can work?

RLG: Above our garage I did try to have a large studio set up for bookbinding. I have a BFA in printmaking and I tried to join those two worlds. But needing community, I decided to move into a more communal art making space.

My space was being less used, and with my son getting older, and needing a studio space for himself—to be able to shoot photography for his watch company— I let him have use of it.

KO: So you’re focusing on research right now as opposed to sitting at your bench and just making away?

RLG: It’s actually a bit of both. I’m trying to balance looking at things as well as trying to make something every day. It might be a small drawing, but definitely trying to have some output.

KO: It’s been interesting to speak with students who either don’t have a workspace set up at home or they’re using their hands in other ways. A lot of it’s the usual suspects like knitting. And a lot of cooking, a lot of baking.

RLG: Right. You can’t not make.

KO: I’ve had conversations with several NBSS students and alumni, and a thread running through these interviews is how makers are adapting to create in their own homes, even with their bathroom sink. Leave it up to a maker, artist, to be able to creatively use their own space to keep making.

RLG: Exactly. That’s one of the things that we as a studio pride ourselves on is the community that we have created and embraced. One of the things was, when we were in the studio every day, we would stop for lunch. Even if you weren’t present at the studio, but you’re a member, and you just wanted to be with the community, you could show up that day at noon and know that the table is filled with people.

To recreate that, we now have a Monday through Friday standing Zoom meeting. The link goes out to all of our members so anybody can show up and expect to see anybody from the studio talking about what they’re working on.

One of our members, Joan Schrier, who actually is a teacher, has put forth an idea of looking at the work of artists like James Castle. We as a group are going to attempt to recreate his style, working with what we have in our houses. On Friday, we’re going to show what we’ve created [to everyone on the call].

KO: I love that. I mean, that is the ultimate in adapting to altered circumstances… What would you say to NBSS students right now, who are suddenly adapting to remote work, away from the School?

RLG: I would definitely say it’s all about filling up the well. What does that look for you as an artist, as a craftsperson, as a maker? Is it looking at other artists? Is it watching movies that take you to another place and can inform your work? Just trying to look at all the different things that are out there because nothing really is in a silo.

You know, people often say that artists aren’t in the real world. But I think we very much are. In fact we’re a lot like scientists. Because scientists are always asking questions.

Artists just manifest themselves in things that you can use in your daily life, whether it’s a wooden spoon, forged spoon, or a tiny silver spoon – it’s all made and created. But there has to be something that generates that curiosity. So, artists and scientists I think are on the same plane in that respect.

KO: That’s a great way of thinking about artists.

RLG: Thank you. In these days of figuring out who’s essential and who’s not essential… there’s a wonderful children’s book. It’s about a mouse named Frederick.

Frederick sits around all summer long, not working. The animal community is so frustrated because he’s just staring off into the sky, looking at the flowers, he’s smelling, he’s thinking. Annoying his community because they know the winter is coming. They need to make sure that they pile up enough food so that they can last through the dreary aspects of winter. 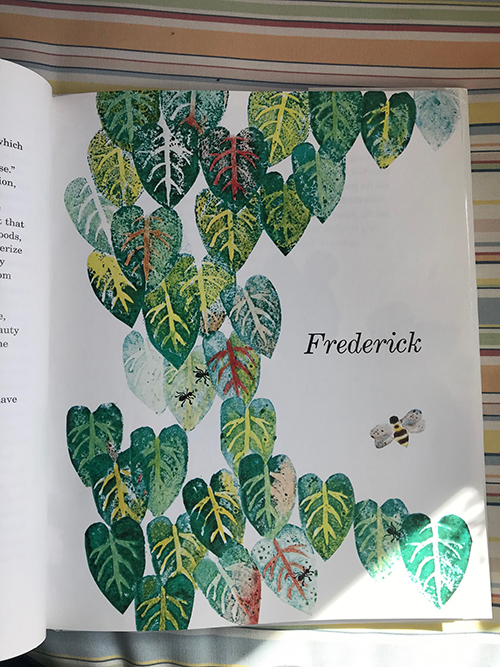 Then winter hits them. They’re all huddling together, down to the gruel, the gray and the horrible. Then Frederick says, “But you need to think about the gorgeous spring and the summer.” Then all of a sudden all these sort of dark pictures become the beautiful blues of the sky and the gorgeous yellow of the flowers. Frederick elaborates on all these wonderful sensations and senses and they realize that winter passes more quickly because of these distractions of wonderful stuff. They realize he’s as essential to them, because he can provide them comfort during that grey and grueling time. It’s a beautifully illustrated book.

KO: I Iove that. I’ll have to see if it jogs a memory for my nieces and nephews.

RLG: I’ll try to find it. When my children were young I specifically bought books I knew I’d want to keep. [laughs] So I know I have it somewhere. I’ll send it to you.

KO: Thank you. So as we’re wrapping up, do you have anything else you’d like to share with the NBSS community?

RLG: Keep on making… and stay healthy. I know something good will come out of this. I don’t know what it’s going to look like. As scary as things are, my niece reminded me that after the plague came the renaissance and the enlightenment.

I have to believe that as humans, something amazing is going to come out of this time. We just have to get through the scary part. [laughs]