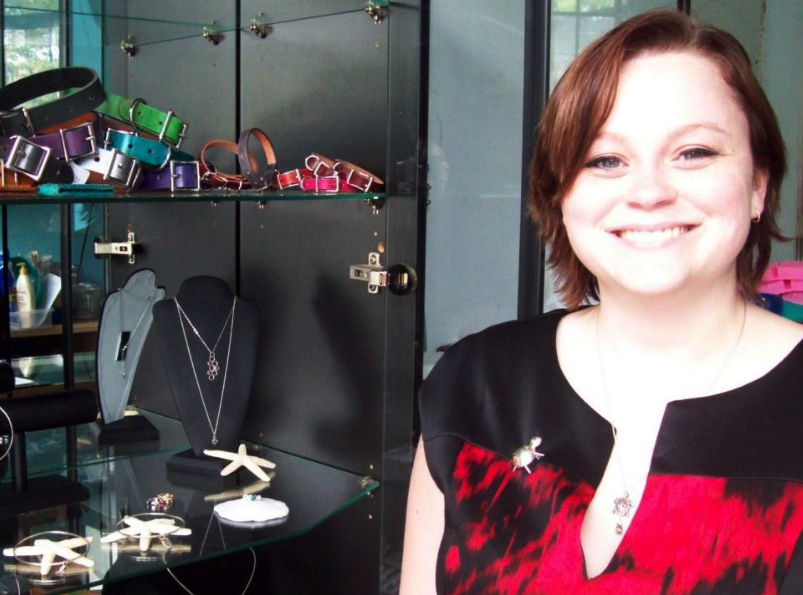 Many NBSS grads go on to open their own businesses and capitalize on the skills they’ve learned. One such graduate, Kaley Ledwidge JM ’14, was featured in the Bourne Courier on July 7, 2016.

The article states, “Harvard and Yale are competitive places, no question. Boston College and Boston University as well. But they are not as directly competitive as the North Bennet Street School. Kaley Ledwidge of Pocasset knows this first-hand.

Now she is starting her own business, determined as ever to be successful, expand, and perhaps open a seasonal shop next year at Mashpee Commons. For now, she’s at 7 Colonel Drive, off MacArthur Boulevard eastbound.

[Ledwidge] is a busy woman. The young jewelry designer is determined. She places a burden of expectation upon herself—masked by charm and smiles… and salesmanship.

…Ledwidge is also ambitious. She hopes to quickly outgrow Colonel Drive. By age 26, she said, her goal is to sell her creations “on the red carpet” at those events that everyone swoons over—especially the gowns worn by celebrities.

Beyond that, she said, she hopes to reach a business point where she can open a Cape Cod jewelry warehouse with booth space for artisans and crafts people. For now, she spends Fridays at Robin’s Nest in Pocasset. Sales are brisk, she said.

Ledwidge may be a bit of a dreamer but she is credentialed with a degree in jewelry-making and repair. Tiffany, after all, knows talent and looks to secure it. But she didn’t want to work on an assembly line in Rhode Island. So she is off on her own and happy with that. Confident, too. Her grand opening is set for July 18.

…Ledwidge is—if nothing else—an achiever. A saleswoman in the making. That point was missed by some on her academic journey but not on North Bennet Street instructors, who contacted Tiffany.

She is understanding. She retains her youthful sense of style and fashion and realizes how all that can change overnight — so much of it being commercially whimsical. Yet she hears success knocking at her door. She likely will attract all types of customers and not just the younger set.

…Ledwidge is on her way. A new life beckons. A long-dreamed jewelry career is taking shape. Her story continues.”

Read the full story from the Bourne Reporter here.

Story and photos by Paul Gately.