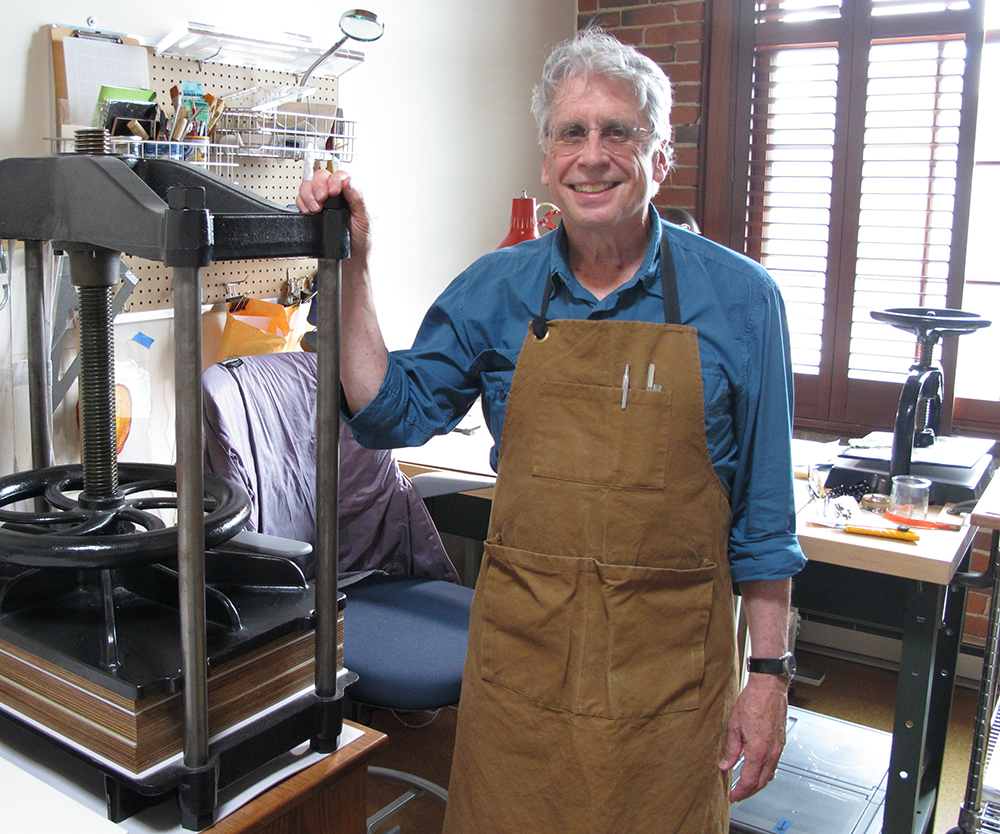 Congratulations to former Bookbinding Department Head Mark Esser, recently awarded the 2021 Lifetime Achievement Award from the Guild of Bookworkers! With a career as a fine binder, teacher, and conservator spanning four decades, he’s considered one of the finest bookbinders in the country.

Bookbinding alumnus James Reid-Cunningham BB ’90 wrote an article for the October 2021 Guild of Book Workers Newsletter, detailing Mark’s long career, his many accomplishments over the years, and how he is a beloved mentor to many. Mark created the curriculum for the two-year, full-time Bookbinding program at NBSS, and served as the program’s first Department Head and Instructor.

James details Mark’s time at NBSS in the article:

“…In 1986, Mark was approached by the North Bennet Street School in Boston to teach bookbinding full-time. A trade and craft school with an emphasis on hand work, NBSS was considering creating a two-year program in hand bookbinding. The school provided him with a proposed curriculum, but he quickly discarded it and created a curriculum based on his experiences [at binderies] in Chicago and Iowa. The program emphasized traditional craft skills, fine workmanship, the use of non-adhesive and reversible processes and structures, the use of protective enclosures to preserve rare books, and the creation of historical models.

The school agreed to his proposed curriculum and Mark took the job. He knew he would need to stay at least three years before he would know if the program was a success or not. If graduates of two classes were to get jobs in the field, Mark would know that his curriculum was successful. The program is still ongoing today, graduating four to eight students per year. Mark’s former students work in both private practice and institutional settings. Although teaching wasn’t his goal and in many ways was never easy for him, he became one of the most influential bookbinders in the nation by training many binders who would become leaders in the field.”

Current Bookbinding Department Head and Instructor Jeff Altepeter BB ’99 says he still feels Mark’s lasting impact on the program and its excellence today. “Mark has continued to be supportive through the years, and I feel grateful I can reach out to him for advice. The training he established at NBSS remains true, which includes an overall foundational approach to bench skills and making historical models as a way to understand bookbinding history and book structures. We appreciate all he has done and continues to do, which I see expressed in the success of our students and graduates.”

Mark doesn’t deserve this award because he’s the best binder in the country, or because his conservation work is unparalleled, or even because he was the best teacher I’ve ever had. He deserves it because he is all of those things at once.

Several former students and colleagues of Mark also shared their appreciation and admiration for him in the article.

“I am proud to be a graduate of the NBSS Bookbinding Program and especially grateful to have been taught by Mark Esser. Mark had a gentle teaching style, although he also was adamant about maintaining high standards in the bookbinding craft…. It has been a great honor for me to have received Mark’s training at NBSS and later, to follow in his footsteps working as the conservator in the John J Burns Library at Boston College.”

“I was lucky to be one of Mark’s students at North Bennet Street School from 1991-1993…. There is no doubt that his influence on me as a professional was deep and lasting, beyond what I learned from my classmates…. What I most hope to convey to those I work with is what Mark conveyed to me: honor, attention, respect for the individual books in our life.”

“There are fewer than a handful bookbinders who excel in all five aspects of the profession: forwarding, finishing, design, conservation and teaching. Mark excels in all of them. The significance of this is that he sets an example with his work and then goes out of his way to help others do the best work they can. And he does it with grace and kindness.…The fact that the [NBSS] program is still going strong is a testament to how perfectly he established the program and how he implemented it.

“Mark doesn’t deserve this award because he’s the best binder in the country, or because his conservation work is unparalleled, or even because he was the best teacher I’ve ever had. He deserves it because he is all of those things at once.”

Read the full article from the Guild’s Newsletter here.