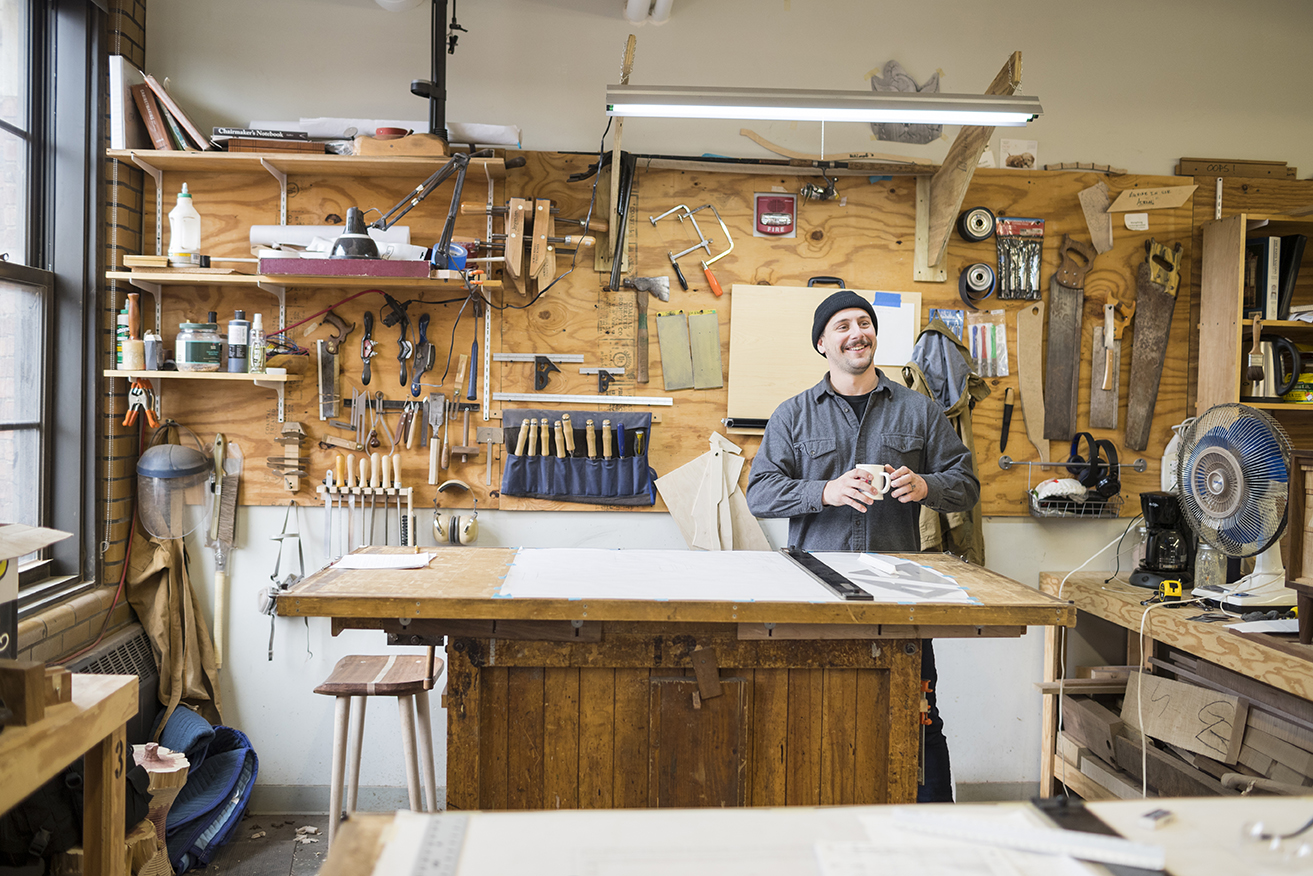 With most things in life, you either pay with your time or your money. Say you want to build a box using 3/4 black walnut. You have three options: Buy boards milled to final thickness from a lumberyard (least time, most money); purchase rough-sawn 4/4 boards to mill yourself (more time, less money); or fell a walnut tree, have a sawyer cut it into flitches, wait years for the wood to dry and mill it to your final dimensions (least money, most time).

This time:money ratio came to mind recently when I was asked about my decision to attend North Bennet Street School (NBSS) as a Cabinet & Furniture Making student. I’d been aware of the School, established in the North End of Boston in 1881, since I began making furniture and seeking out woodworking wisdom—and as a veteran of the United States Marine Corps, I paid for the opportunity to attend with my time. After years spent serving in the military, I am fortunate to have earned education benefits that allow me to explore my woodworking passion. Living and training in Boston can be a financial challenge, but VA benefits allow students like myself to focus solely on studying.

Upon arrival, I was surprised to learn the School’s current veteran attendance is at its highest since the post-Vietnam era. As of this writing, one in five of the students is a veteran, and that number is expected to rise in coming years.

Most, if not all, of us will tell you without hesitation that the first day of school marked a new chapter in our lives.

But why are so many veterans attracted to the craft? I can only figure that, as craftsmen and craftswomen, we train in pursuit of that high we get from making something with our hands, stepping back and admiring it.

Beyond this primal thrill, though, I’ve found many lessons taught in the military parallel the values of fine crafts and trades. Both in the Marines and school, I’ve grappled with a need to succeed the first time and the necessity of precision. I daily consider the value of hard work, a thorough plan and an ability to anticipate possible failures.

In the military, these lessons are burned deep into a soldier’s subconscious— failure to learn them can have deadly effects. In the world of woodworking and fine craftsmanship, it’s your product, your reputation and your fingers that hang in the balance.

But some military lessons just don’t apply to the world of craft. Instructing a budding woodworker to build his or her project “by any means necessary” isn’t the best advice. Neither is the concept of achievement through brute force particularly helpful.

I tried to note a distinguishing factor of veteran NBSS students but realized that, similar backgrounds aside, we’re really identical to other students. Most, if not all, of us will tell you without hesitation that the first day of school marked a new chapter in our lives. Walking through the halls and machine rooms, stepping around students’ benches, looking at freshly varnished furniture—the only way to tell a veteran student from others is to ask.

Woodworkers arrive at school with a singular mind, just as we all felt the same inner tickle with our first step into a woodshop. And the belief that led us veterans into recruiting stations also pushed many toward woodworking programs: the belief we can create something greater than ourselves.

Grant served as public affairs director for the NBSS Student Veteran Organization when he was a student. He’s a former screenprinter, cage fighter, and carpenter, and he’s now a co-host on The Dusty Life podcast. See his current work on his website. Shared with permission from Popular Woodworking Magazine’s “End Grain” series, February 2017.

Made For Veterans, By Veterans

Toy Making for the Holidays