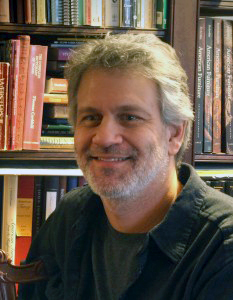 In an episode of 360 with 360WoodWorking that aired on April 27, 2017, Mark Arnold CF ’96 of Boston Woodworking discussed his time at North Bennet Street School, editing and writing for American Period Furniture Magazine and a woodworking technique known as sgraffito, which he’s teaching at the Marc Adams School of Woodworking in late June 2017.

“[NBSS] students come from not just all across the country, but all around the world, ” he said. “And it’s a melting pot where people bring different ideas, different aesthetics for things they appreciate.”

Mark Arnold is a graduate of NBSS who returned to mid-Ohio after graduation. While running his business, he and his wife decided to take on editorship of an annual magazine published by the Society of American Period Furniture Makers. Along the way, Mark discovered a woodworking technique often associated with pottery and ceramics – it’s the process of layering contrasting woods then carving or cutting through the top species to expose portions of the species below.

360 Woodworking publishes a podcast every Thursday with a lively discussion on everything from tools to techniques to wood selection.

Listen to the podcast here.