Mayor Walsh to Speak at 2016 Commencement 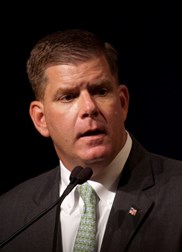 Mayor Walsh is a lifelong Boston resident who formerly served in the Massachusetts House of Representatives and headed the Building and Construction Trades Council of Boston’s Metropolitan District. He has won national recognition for expanding young people’s opportunities and shares our commitment to workforce development, civic responsibility, and access to quality education for Boston youth and veterans. Since taking office, the Mayor has worked to create good jobs, great schools, safe streets, and affordable homes, while building a more responsive and representative city government.

The Mayor’s Office of Workforce Development is a key component of these efforts, and NBSS is the recent recipient of Neighborhood Jobs Trust funding from the initiative. The $80,000 awarded to our Carpentry and Locksmithing & Security Technology programs provides important training to economically disadvantaged young adults, and to ensuring that all Boston residents have a fair shot at realizing their full economic potential.

This is the first time in our 135-year history that a sitting mayor will deliver a commencement speech at NBSS. However, in recent years the School has had visits from both Mayor Walsh, who spoke at NBSS’s solar energy system dedication a year ago, and from former Mayor Thomas M. Menino, who in 2013 addressed a large crowd as part of our new building ribbon cutting ceremony.

The 2016 Commencement will see over 100 students from all nine programs joining the NBSS alumni community. They come from a variety of backgrounds and from locations around the world, representing one of the most diverse classes ever.

As in previous commencements, we expect a capacity crowd for the event. The ceremony will bring together those graduating and their families, in addition to current students, faculty, staff, our Board of Directors, and our Committee of Overseers.