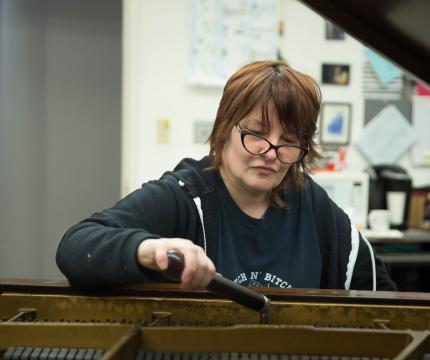 “From a young age, many children dream of what they want to be when they grow up. While some hope to become firefighters or teachers, Michelle Stranges knew from a young age that she was meant to be a piano tuner.”

Michelle, a 1993 graduate of the Basic Piano Technology program and a 1994 graduate of Advanced Piano Technology, certainly has a life-long dedication to her craft. She was recently featured in an article by her employer, Western Washington University. Michelle is their first full-time piano technician, caring full-time for the university’s 85 pianos and four harpsichords.

The article, written by Hannah Wong, says Michelle took piano lessons as a child, but ended up being much more interested in the piano technician who came to their home to tune the instrument than playing herself. “Stranges would often pester the tuner as he worked on her piano, wanting to see and understand the tuning process. In fact, Stranges enjoyed watching him work so much that she would often make excuses that her piano was out of tune, just so he would come over.”

Michelle knew that she wanted to work with her ears and her hands, which eventually led her to pursue her early-incubated love of tuning. That led Michelle to the NBSS Piano Technology program, now the one of the only in-person piano technology training programs in North America. After she graduated, Michelle worked as a technician at various institutions and schools. Eventually, she landed her dream job in Bellingham, Washington at Western Washington University.

The article continues, “As a piano technician, Stranges feels a responsibility to pianists to provide them with the best possible instrument. ‘Pianists need technicians, and we need pianists,’ Stranges explains. ‘We have to make sure that we can give them an instrument that allows them to think of just the music aspect of performing; we take care of the rest.'”

Pianists need technicians, and we need pianists. We have to make sure that we can give them an instrument that allows them to think of just the music aspect of performing; we take care of the rest.

“…When asked what the best part of her job is, Stranges has a hard time narrowing down just one answer. One of the most rewarding moments, she says, is listening to a performance on an instrument she’s tuned. ‘Sitting in the audience and knowing that you played an important role in preparing the instrument for that performance, that’s a really cool moment. That’s a big part of why I do what I do.'”