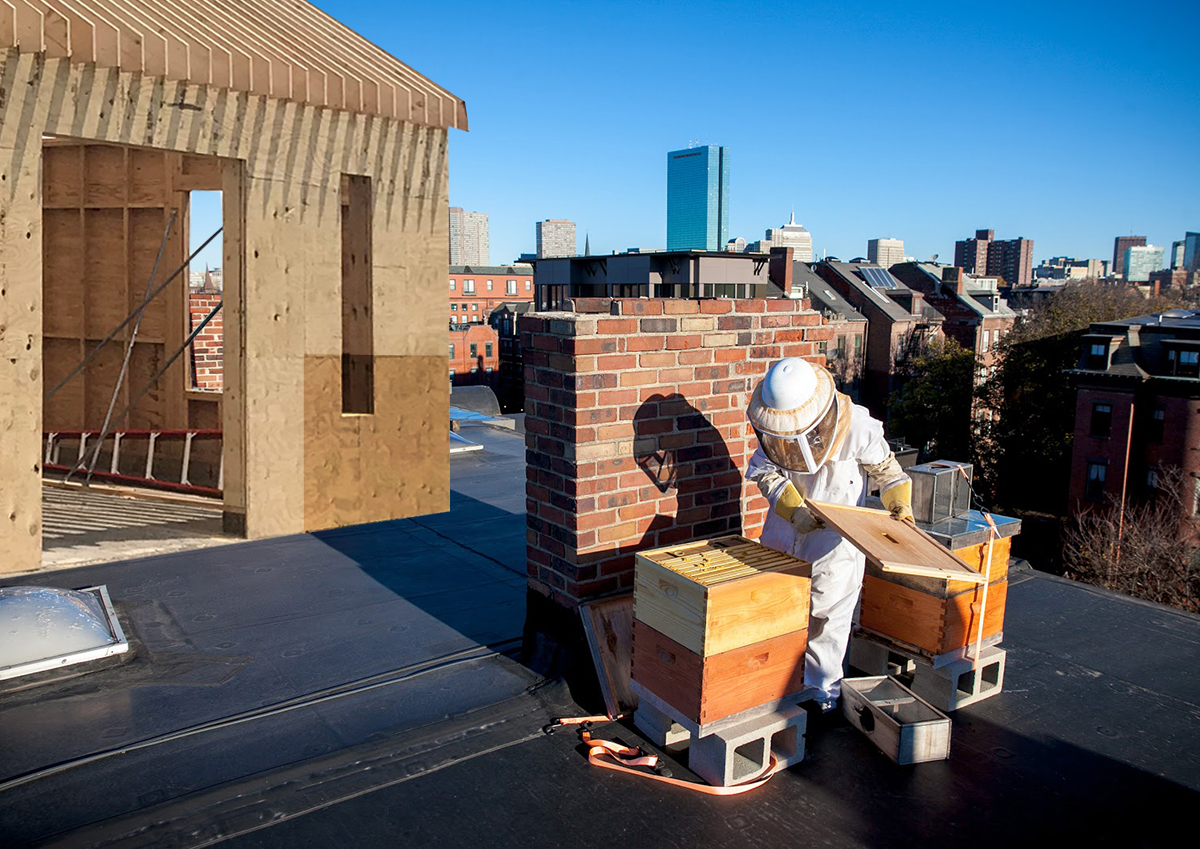 On the heels of our collaboration with Historic Boston Inc’s award-winning urban farm, North Bennet Street School is proud to announce new Full-Time programs in Urban Beekeeping and Falconry Technology, beginning this fall.

Though urban farming may sound like a contradiction, the practice is nothing new for Boston. Beekeeping has gradually been increasing in popularity in the last 10 years, according to the New England Beekeepers Association. In Boston area alone there are more than 500 colonies. The U.S. Department of Agriculture estimates that in 2016, there were 2.8 million colonies from which honey was harvested in the U.S.

Given this growth, Urban Beekeeping was a natural choice for a new Full-Time program. A variety of bee species will be nurtured, including carpenter bees, which will make good use of excess material from our woodworking programs. Intricately detailed hives have been constructed by our Cabinet & Furniture Making program, with special latches developed by Locksmithing & Security Technology students. The honey collected will be sold to offset program costs.

More bees is good for plant pollination and for the variety of crops that rely on bees. Yet, according to the Center for Pollinator Research at Pennsylvania State University, the “pollinator population,” which includes bees, is declining worldwide. NBSS hopes to combat this issue with its new program.

Over the winter, our Carpentry and Preservation Carpentry students began constructing the new 20,000 sf barn that will soon be complete, home to dozens of bee hives. Also included in the barn will be habitats for falcons, which with spring around the corner, are flocking back to Boston.

Falconry Technology at NBSS came about when a young peregrine falcon began nesting on the School’s roof last summer. Over time, the bird began to trust Bookbinding students who took it “under their wing” by constructing special leather gloves to better handle the raptor, using scrap materials from their practice. A student in Jewelry Making & Repair created a decorative bracelet and strong chain for the powerful avian.

Peregrine falcons only need two things to really prosper: high spots to nest and flying birds to hunt for food. Cities have many tall buildings and a wealth of birds, so they’re wonderful places for peregrines to be. In Boston, as many as six peregrine nests can be found in 1 square mile of downtown real estate. They not only keep rodent population in check, but are beautiful to behold. Their claws can be dangerous however, and they’re known to provoke easily. Music from instruments serviced and/or crafted by our Piano Technology and Violin Making & Repair programs will help sooth these majestic creatures.

Both the Urban Beekeeping and Falconry Technology programs will begin accepting students this fall. With the success of these new programs, NBSS hopes to expand to Ice Sculpting, Shellfishing & Clamming, and Sauna Building & Repair within the next five years. Stay tuned.

Editors note: April Fool’s! Though this was a lighthearted joke, it has real-world inspiration… Our Preservation Carpentry students did significant work on the Fowler Clark Epstein Farm, an innovative project which houses Boston’s Urban Farming Institute. Also, one of our Cabinet & Furniture Making students did help rescue a small falcon at NBSS this past summer. So not all false!

One last note: though NBSS is focused on hand skills training in traditional trades, we appreciate all those who make our lives better through their craft. Farmers, beekeepers, animal trainers, artisans, and others. Life is better with people who take care in their work and provide for others. Keep up the good work!