Play Me, I’m Yours: Behind-the-Scenes Artistry

It’s hard to miss the pianos currently dotting street corners in Boston — brightly painted and often the center of clusters of people talking, laughing, and of course, playing music.

The people who tune, maintain, and care for these communal instruments, however, are almost invisible.

“Piano technicians are often called ‘the unseen artists,'” says Debbie Cyr PA ’93, faculty member of the Piano Technology program at North Bennet Street School (NBSS). Whether virtuosos performing within packed concert halls like the Boston Symphony Orchestra, or elementary students drumming away at the keys in Boston Public Schools, piano technicians ensure the sounds are pitch-perfect. (NBSS students have worked at both BSO and within BPS.)

NBSS is one of just two schools in North America that train piano technicians. Demand is high for these craftspeople — the School’s employment rate for its two piano programs exceeds 85%, and it’s not unusual for alumni to make $60k to $100K a year. The School oversees seven other craft-based programs that are similarly well-regarded and among the best in the world.

“People come together and interact in ways that they never would have if the piano hadn’t been there between them. With the slashing of arts and music budgets this brings something important back to the forefront – that arts in all their forms are a valued part of society.”

NBSS piano technician students and alumni are at the heart of a public art installation in Boston called Play Me, I’m Yours. The project recently placed 60 pianos throughout the city, each decorated by a local artist, and available for public use in plazas, parks, and side streets. Managed by Celebrity Series, a major presenting organization with over 100 performance and outreach activities annually, the installation is running in its second year, and continues through Monday, October 10.

NBSS alumnus Mike Wilson, PT ’11, PA ’12 and owner of Modern Piano in Watertown, has been the lead technician for both Boston installations of Play Me, I’m Yours. For the last three months he’s worked with Luke Ouellette PT ’15, PA ’16 and a cohort of present NBSS piano technology students to prepare the donated pianos for their debut, by repairing and tuning all 60 of them for the installation. And for the last two weeks, this team of dedicated technicians has been deployed time and again to tune and maintain the pianos while on the streets. 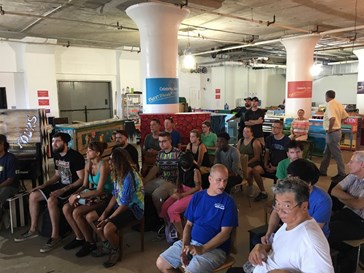 Mike and team has looked forward to working on Play Me, I’m Yours again since its original installation (in 2013) proved wildly popular. “We’ve all been really excited for this year’s project. I love not only working with students and artists, but also love to watch what happens at a piano when it’s finally installed,” Mike shares.

Right: The full NBSS Piano Technology class on a summer field trip with Modern Piano to the warehouse where all 60 artist-streets pianos were stored.

The instruments bring strangers together over a cup of coffee and a few chords, but it also unites people over craft, their love of making, of working with their hands.

“People come together and interact in ways that they never would have if the piano hadn’t been there between them,” Debbie says. “With the slashing of arts and music budgets this brings something important back to the forefront – that arts in all their forms are a valued part of society.”

With pianos out on the streets more people are being exposed to not only music, but also to the people and the craft that keep these instruments alive.

Mike’s talked with members of the public about the background of the piano on which they’ve just played a few notes or a whole concerto. “Not many knew piano tuning is actually a career, and they’re excited about not only the art of the piano but also how it works.” He continues, “Finding the people who are excited about making things, about doing things with their hands, constantly reinforces that you’re doing a good job. Not just because you’ve tuned that piano to sound perfect, but also that you’re making people happy.”

Sometimes it’s not about being seen – it’s about making things happen.

Play Me, I’m Yours, by Celebrity Series in 60 sites throughout Boston, ran through Monday, October 10, 2016.