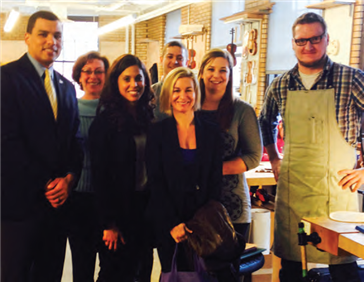 North Bennet Street School has a long history of working with veterans to retrain them for jobs that require a mastery of hand skills. When I became Director of Admissions in 2011, President Miguel Gómez-Ibáñez, himself a Navy Seabee, asked me to reconnect with veterans and build the student veteran population.

For the past five years, the Office of Admissions and Student Success has intentionally worked at building relationships with veteran advocacy groups such as The City of Boston Department of Veteran Services, Veterans Affairs, The Boston Vet Center, The New England Center for Homeless Veterans, Red Sox Foundation and Massachusetts General Hospital Home Base Program, Veterans Upward Bound, and Wounded Warrior Project.

The best way to introduce NBSS to these groups is to bring the organization’s leaders to the school. In February 2015, we hosted the inaugural NBSS Veterans’ Round Table to discuss issues of recruitment and support of students and graduates who have served. This event was attended by State Secretary of Veterans Services for the Commonwealth of Massachusetts, Francisco Urena, Commissioner for the City of Boston Veterans’ Services, Giselle Sterling, and other key stakeholders. In July 2015, we hosted the Greater Boston Veterans Collaborative, a veterans’ advocacy group that includes Iraq and Afghanistan Veterans of America, Team Rubicon and The Mission Continues, among others. In the same month, we launched the Boston Colleges and Universities Veterans Admissions Collaborative; a new initiative to share best practices for admissions professionals in recruiting and retaining student veterans. I am excited to be co-leading this initiative with Laura Piscopo, Director of Administration at the Commonwealth of Massachusetts Department of Veterans’ Services and with The City of Boston.

The results of these initiatives are impressive. In September 2015 we admitted nineteen new and eleven returning student veterans. These thirty students have formed a Student Veterans Organization that meets weekly to support each other and their professional endeavors. Student veterans make up 20% of the student body which, according to 2015 Military Friendly® Schools list, makes NBSS number three in the commonwealth for percentage of active duty military and student veterans. While this is statistically significant, what is most important is the positive impact this has on the lives of veterans and their families. Each student at North Bennet Street School has a unique story about how they came to train here, how their training is transformative, and how they are forging a career from their training. Veterans share this commonality and bring with them their mission-driven military training and experiences.