With a recent grant from The Boston Foundation, the total amount raised by North Bennet Street School for its Workforce Development/Diversity Initiative has reached nearly $500,000. 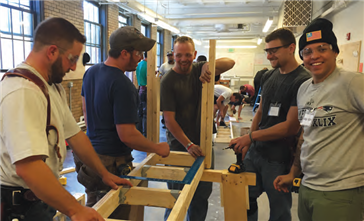 “Over the past five years, support for this important program has been provided by a large number of local foundations in addition to The Boston Foundation.” said Miguel Gómez-Ibáñez, NBSS President. “It is an impressive demonstration of the ability of local foundations both large and small to work together in a cooperative fashion to fund programs that reflect their shared interest in the needs of the community.”

The Workforce Development/Diversity Initiative provides young adults from Boston’s schools and economically disadvantaged neighborhoods with a viable pathway from high school or the unskilled labor force to meaningful, lifetime employment. The program makes it possible for NBSS to offer scholarships and funds for tools and materials, as well as support services critical to students’ success such as a financial literacy workshop and a mentoring program for enrolled students and graduates.

The Initiative has benefited students such as Aramarie Colon, a 2015 graduate of the Locksmithing and Security Technology program. Aramarie was in the Facilities Management program at Madison Park Vocational Technical High School. She attended NBSS to increase her qualifications as a facility manager. She says that while facilities management and locksmithing are ‘male dominated’ fields, she wants to be a role model for other girls and women. Aramarie is also a graduate of the neighboring Eliot K-8 Innovation School, a long-time partner with North Bennet Street School in cooperative educational programs.