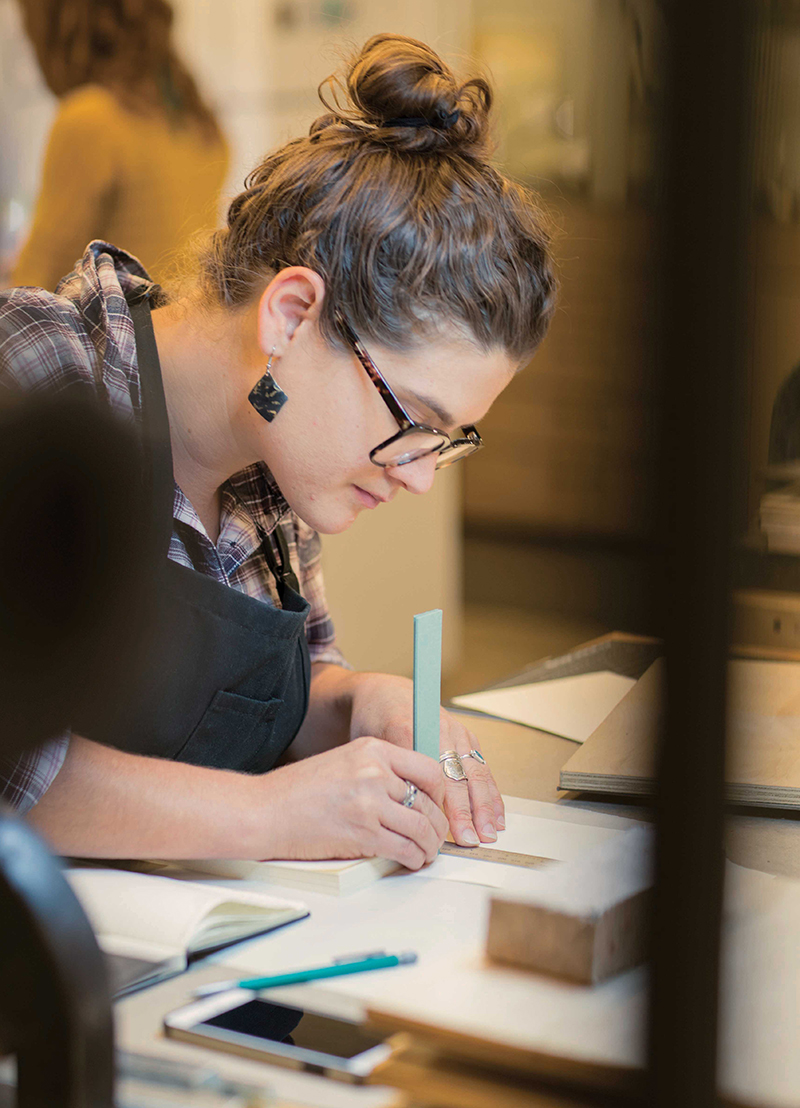 Nine years after he passed away, master bookbinder Joseph Newman is still vividly remembered not only by his many friends and colleagues, but also because of the Joseph Newman Bookbinding Scholarship at North Bennet Street School, which honors his legacy by supporting aspiring bookbinders.

“Joe loved to teach people who were newer to the field,” recalls Deb Wender, retired Director of Book Conservation at the Northeast Document Conservation Center (NEDCC), where Newman served as senior book conservator. “He really loved to see new people come along, which makes the scholarship in his name so perfect.”

Over $13,000 was raised for the Scholarship through the Joseph Newman Bookbinding Exhibit, organized by Bookbinding Department Head and Instructor Jeff Altepeter BB ’99 with help from Joe’s brother, Walter Newman, and held at the School in November 2015.

“The exhibit brought out a fantastic gathering of bookbinding professionals from as far away as Texas. We welcomed Joe’s family and friends, as well as collectors and potential clients,” explains Jeff. “Every scholarship dollar raised is important, of course, and these funds are dedicated to Bookbinding students. This and our other exhibits help our students make connections in the community. We encourage that, too, because our field by nature is very collaborative and social.”

Joe entered the profession in the mid-1970s, apprenticing at Boston’s Harcourt Bindery where he went on to become bindery foreman before opening his own bindery in Beverly, Massachusetts. In the mid-1980s, Newman became a book conservator at NEDCC, where he conserved titles including an early copy of the Magna Carta.

“This and our other exhibits help our students make connections in the community. We encourage that, too, because our field by nature is very collaborative and social.”

“Joe was a tremendously skilled binder and conservator and he was also very hard working. His fine bindings were creatively executed and exquisite,” says Mary Patrick Bogan, NEDCC’s current Director of Book Conservation. “He believed in the bigger picture—understanding where the books you were working on came from. We all benefitted from his connoisseurship. He was very funny, too, and a joy to be around.”

Mary Patrick believes Newman would have been pleased by both the scholarship and the exhibit. “The exhibit was beautifully done and provided a wonderful look at how he approached fine bookbinding and models of book structures. Joe believed in learning and I think he’d be very happy to see his name connected to efforts that expand knowledge.”

Todd Pattison, Senior Book Conservator at NEDCC, remembers his friend by two of his nicknames. “Joe was always called either ‘Dr. Binder’ or ‘The River,’ the latter because a river brings water, sediment, and fish and, like that, Joe brought a wealth of information forward which he always shared with other people. He taught me so much over the 20 years we worked together. He changed my life,” says Todd, who believes Newman’s legacy will live on.

“We still call it ‘Joe’s Bench’ even now 10 years after he last used it,” explained Todd of Joe’s former NEDCC work station. “Another conservator, Jessica Henze BB ’06, has used the bench for years, but it will always be his. Jessica didn’t know Joe, but I think she benefits not only from the library on the history of bookbinding that he left us, but also from working at his bench.”