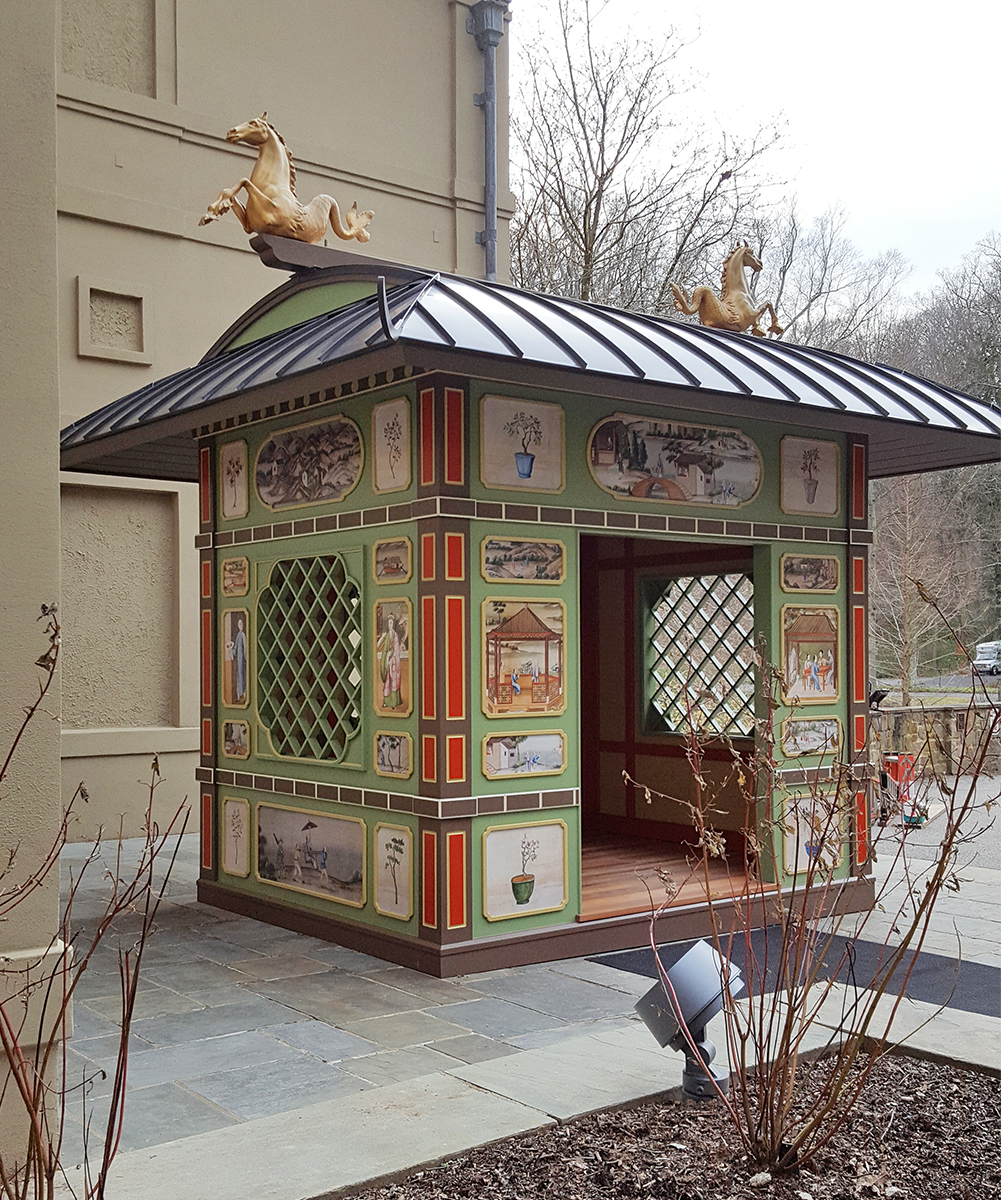 When one of the nation’s premier museums of American decorative arts wants to include your work in a special exhibition, you’re doing something right. If you’re Rob McKeown CF ’88, furniture maker and carpenter, that something may be more like everything.

Rob has applied his considerable skills to a variety of projects, from making Chippendale furniture in a “very traditional” Queen Anne style to building his own home — a reproduction of one found in Colonial Williamsburg.

Indeed, Rob’s work recently caught the attention of Carol Long, Curator of the garden at Delaware’s Winterthur Museum, Garden & Library, the 175-room childhood home of Henry Francis du Pont (1880–1969). The Museum is best known for its collection of some 90,000 American decorative arts objects made or used in America between 1640 and 1860.

“I’d built some cabinets for Carol at her home. And when she initially contacted me about Winterthur, it was about repairing two existing follies, the Bristol Summer House and the Umbrella Seat,” explains Rob, the longtime proprietor of Elk Creek Cabinetry in his hometown of Elkton, Maryland. “For those structures, I replaced a cedar roof and did some minor cosmetic repairs.”

A special exhibit entitled “Follies: Architectural Whimsy in the Garden,” which runs through January 5, 2020, expanded Rob’s scope of work. The Garden now features 13 fanciful architectural structures – including two designed and built by Rob – positioned throughout the landscape to pique the curiosity of Winterthur guests.

“When Rob was working on this project, I could see the details through his eyes. Rob is confidence without ego. He’s a total professional, sensitive to details and budget, who takes everything into consideration.”

After building his majestic home, H. F. du Pont commissioned six follies – a feature of 18th-century English and French landscape gardens – for the Winterthur countryside. To this original set, an additional seven have been added specifically for the exhibit, according to a very pleased Carol.

“When Rob was working on this project, I could see the details through his eyes. Rob is confidence without ego. He’s a total professional, sensitive to details and budget, who takes everything into consideration,” she says.

Rob’s first Winterthur folly was a Chinese Pavilion, inspired by the Chinese House built at Stowe, a country house in Buckinghamshire, England, in 1738, and an example of 18th-century fascination with Chinese objects and ornamentation.

“I used treated lumber for the frame, did a tongue and groove mahogany floor, and clad the interior and exterior with marine-grade plywood,” says Rob. “To that I added sapele mahogany frames around images recreated from the wallpaper in the Chinese Parlor of the main house at Winterthur. The windows are Chinese Chippendale in design, also in sapele, with a lattice-type frame.”

The Chinese Pavilion complete, Rob turned his attention to the next structure, the Mirrored Folly, a mirror-clad building based on the porte cochere of Winterthur’s historic train station.

“For this one, I used pressure-treated lumber framing clad with plywood and wrapped in waterproof membrane, and acrylic panels with mirrored coating on the back. I was painting the Mirrored Folly the day before the exhibit opened, but it was finished on time,” says Rob with a laugh and a still-clear sense of relief.

Not an everyday assignment for Rob, “Follies” called upon not only his professional experience, but also his education. “I was 19 when I started at NBSS. I may have been the youngest student there at that time. My only prior experience in woodworking was from high school. The skills I learned at NBSS I still use every day,” he says. “I couldn’t do what I do without them.”