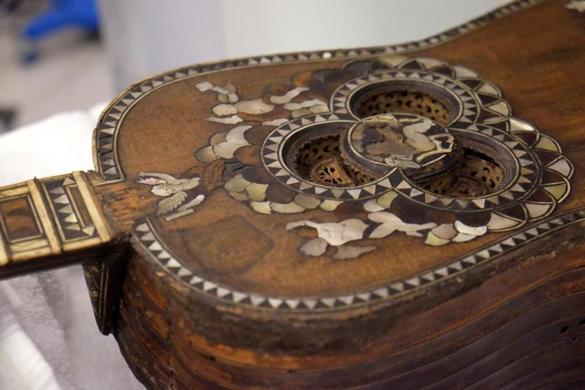 “Crafted in the 1720s, the rare guitar, which normally resides in the Raphael Room at the Isabella Stewart Gardner Museum, has definitely seen better days. Its once-sumptuous inlays depicting musical cherubs and flowers have dulled or chipped away over the centuries. Areas around the guitar’s neck and sides were clumsily restored after a particularly brutal accident long ago, and its age-dimmed wood is in need of something more than Pledge.

But it was the guitar’s mysterious innards that prompted museum conservators to bring it in for a battery of exams normally reserved for living bodies: first a CT scan, followed by the endoscopy.

‘By knowing more about what’s going on with this piece structurally, we can more appropriately approach its repair and treatment,’ said Holly Salmon, an objects conservator for the Isabella Stewart Gardner Museum. ‘It will help us understand the history of the piece.’

Made by the obscure luthier Jacopo Mosca Cavelli, the precious guitar is a particularly ornate example of a “chitarra battente,” a metal stringed instrument more often associated with street musicians. Boasting a rich inlay of tortoise shell, bone, and mother of pearl, the instrument has a distinct clover-shaped sound hole ornamented with an intricately carved lattice of walnut.

As a key step toward the guitar’s restoration, Salmon and her fellow conservators arrived at Massachusetts General Hospital last week for the guitar’s CT scan. Placing the instrument on a bed of towels, doctors and conservators observed as the doughnut-shaped machine delivered some 1,600 images of the guitar’s interior structure.

‘This neck was yanked out of the guitar at some point,’ Kevin Kelly [VM ’92], a Boston-based luthier, said as he watched spectral images of the guitar appear on the monitor. ‘Did they just paste it back in, or did they do something to reinforce it?’

The answer will be critically important to Melissa Carr, the conservator responsible for the guitar’s restoration.

‘We’re not going to restring it to playing condition. The damage to the neck is too bad,’ Carr said. ‘Right now when you look at this guitar you see what’s wrong with it, not what’s right with it. And most of it is right, but the problem is that what’s wrong with it is so distracting.’

Made by the obscure luthier Jacopo Mosca Cavelli, the precious guitar is a particularly ornate example of a “chitarra battente,” a metal stringed instrument more often associated with street musicians. Boasting a rich inlay of tortoise shell, bone, and mother of pearl, the instrument has a distinct clover-shaped sound hole ornamented with an intricately carved lattice of walnut.

What makes the 14-string guitar even more rare, however, is that it’s one of only two known instruments by the Perugia, Italy-based Cavelli. An inlay on the headstock bears his name. The other—in playing condition, even more ornate, and sharing many decorative elements with the Gardner guitar—resides some 200 yards away at the MFA.

… Many museums have performed similar operations on ancient objects such as mummies, and CT scans are increasingly common in the world of high-end instrument sales.

‘Especially for string instruments,’ violinmaker Kelly said. ‘I’ve heard of deals that are dependent on the results of the CT scan. There are things that can affect the value, and violin restorers are so good at hiding them.'”

Read the entire article and watch a video of the CT scan process on The Boston Globe‘s website.