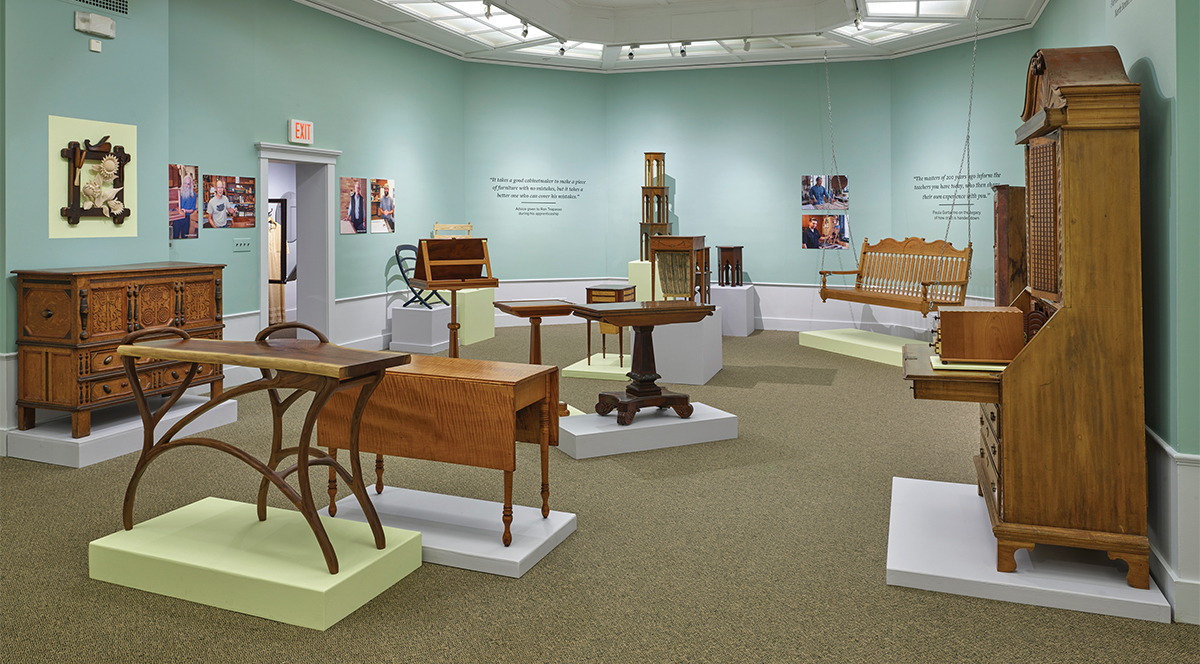 Exhibit photo courtesy of The Trustees

It’s clear that students who study at NBSS have access to rigorous training that advances their skills, heightens their understanding of materials, and sends them into the working world with a new outlook on their craft.

What may be less easily noticed is that the work of every NBSS graduate exists at the intersection of expert craft and creative interpretation. Throughout their daily work, NBSS artisans are constantly readjusting their approach and drawing on their environment and history for inspiration.

This truth about NBSS alumni was made perfectly clear through Conversations in Craft: Furniture from The Trustees Collection and North Bennet Street School Artisans. Curated by The Trustees’ Senior Curator, Christie Jackson, this exhibition featured newly-created, original pieces of wooden furniture made by thirteen select faculty and alumni from NBSS, alongside “four centuries of furniture” from The Trustees’ historic collections.

“I wanted to show NBSS artisans not only beautiful pieces but also ones that had great stories,” says Christie. “One person may see a cut of wood or an angle that gets them going, but for someone else, it may be the story of how that object came to be or where it’s from that’s inspiring.”

NBSS has a sense of history and preservation. They understand tradition and are continually exploring is relevance in their work. This was what Conversations in Craft was all about: how objects, and their makers, remain relevant across generations.

The exhibition included 13 original works in all, each offering a unique perspective. One pairing showcased a new hard maple stand with gorgeous marquetry alongside a tilt-top table from 1810. In another set, a carved outdoor swing drew inspiration from multiple sources, including a historic corner cupboard and an inscribed ring discovered during the research process. Other new pieces in the exhibit spanned styles and typologies: a folding chair, a set of nesting tables, a twig lantern, and a sunflower wall hanging among them.

One of the best outcomes from the collaboration was how visitors engaged with The Trustees’ historic pieces. Christie recalls people of all ages, especially children, gesturing between the original furniture and its newly inspired companion piece in an attempt to make connections between the two. “When you read the artisans’ statements about what inspired them or captured their eye, these works suddenly become relatable. That factor allowed us to have meaningful conversations with exhibit guests,” she shares.

The collaboration and subsequent exhibition at Fruitlands Museum was a huge success, with people of all backgrounds attending, including collectors, families, and curious members of the public, some of them new to The Trustees altogether. The exhibit was even extended by a month, and an anonymous donor was so moved by the aforementioned swing that they purchased it for The Trustees, adding to their collection.

Christie believes that the values of artistry and respect for craft’s legacy made the collaborative exhibit a perfect match. “NBSS has a sense of history and preservation. They understand tradition and are continually exploring its relevance in their work. This was what Conversations in Craft was all about: how objects, and their makers, remain relevant across generations.”