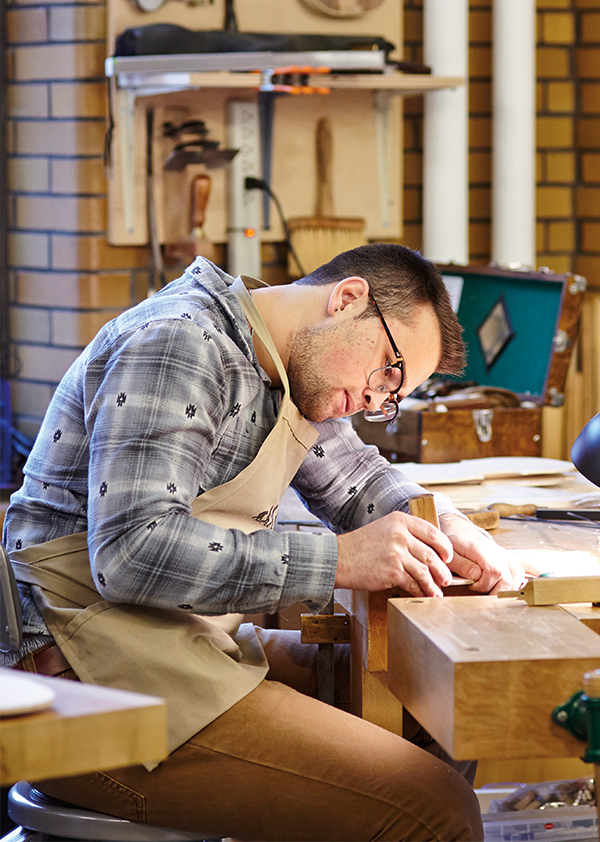 The axiom may be “the third time’s the charm,” but for two recent graduates of the Violin Making & Repair program, their first entries in a prestigious competition proved to have the charm (and more) needed to become winners.

Justin A. Hess VM ’11 received a Silver Medal for Workmanship in the Violin group, and Evan Loewenstein-Davenport VM ’16 earned a Certificate of Merit for Tone in the Viola category at the biennial Violin Society of America (VSA) convention.

Justin began his career in Philadelphia where he worked with violin makers Christopher Germain and Frederick W. Oster, focusing primarily on restoration.

Now based in Brooklyn, N.Y., Justin serves as workshop foreman for Samuel Zygmuntowicz, whose clients have included Joshua Bell, Cho-Liang Lin, and the late Isaac Stern.

“I am fortunate to be working with Sam. He has tremendous knowledge and gives me great insights into the work. These are my fourth and fifth post- NBSS instruments. The one I entered in VSA was my third outside the School.”

Workmanship is hard. One has to have a lot of practice, usually 10 to 15 years, to reach this level. The makers who compete at the VSA represent the highest level of violin making in the world. What Justin and Evan have achieved is unheard of. Their remarkable success has raised the reputation of our program.

Both Justin and his violin were in good company at the competition. “There were some 300 other violins competing and so there was really no telling how it would go,” explains Justin. “I was hopeful that I might receive a certificate, but I certainly wasn’t confident that I would win anything. I was enjoying the evening with friends at our table and when my name was called, it was a complete surprise.”

While at NBSS, Evan made five violins, an upright bass, and two violas—exceeding VM program requirements of six violins and one viola. After graduation, he became an assistant to master violin maker David Wiebe in New York, but recently moved back to his native New Mexico, where he is now with Robertson & Sons Violin Shop, focusing on restoration and making.

Evan entered a Gasparo Da Salo-inspired viola—the first he made at NBSS—into the competition. “The VSA International Competition attracts the best of the best makers in the world. I saw it as an opportunity, not in the hopes of winning something, but of learning something. When they called my name, I was shocked. It was just incredible.”

Both Evan and Justin credit much of their success to the education they received at NBSS, and to their instructor, Department Head Roman Barnas.

“I could write a book about my positive experiences at NBSS. Roman and the VM program offer the best violin making education in the world right now. I don’t know many people who are as good-hearted as Roman. I think he is the most caring, inspiring teacher in violin schools today,” says Evan.

And as Justin sees it, “Roman really created a great foundation for my career. He helped me develop a discerning eye and the foundation of hand-tool work and standards for quality that are among the things that make NBSS stand out.”

“Workmanship is hard. One has to have a lot of practice, usually 10 to 15 years, to reach this level. The makers who compete at the VSA represent the highest level of violin making in the world. What Justin and Evan have achieved is unheard of,” according to Roman. “Their remarkable success has raised the reputation of our program.”