Preserving the Shingle Style at NBSS 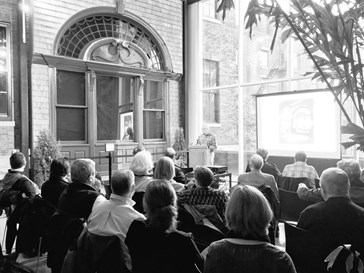 As part of Preservation Month, NBSS hosted a crowd of over 50 attendees for a lecture on the restoration of the Loring House window by Preservation Carpentry students.

In addition to presentations from faculty and students of the School, Friends of the Loring House committee member Lynne Warren spoke fondly of the preservation efforts made by the community and the eventual salvaging of the window by NBSS.

View a timelapse video of the project here. The window restoration project was also featured in the May issue of Design New England Magazine.

Below is a brief history of the Loring House as well the Preservation Carpentry student work that took place.

Check out @NBSSboston on Instagram for a number of pictures of the Loring Window project from start to finish.