The Best Seats in the House 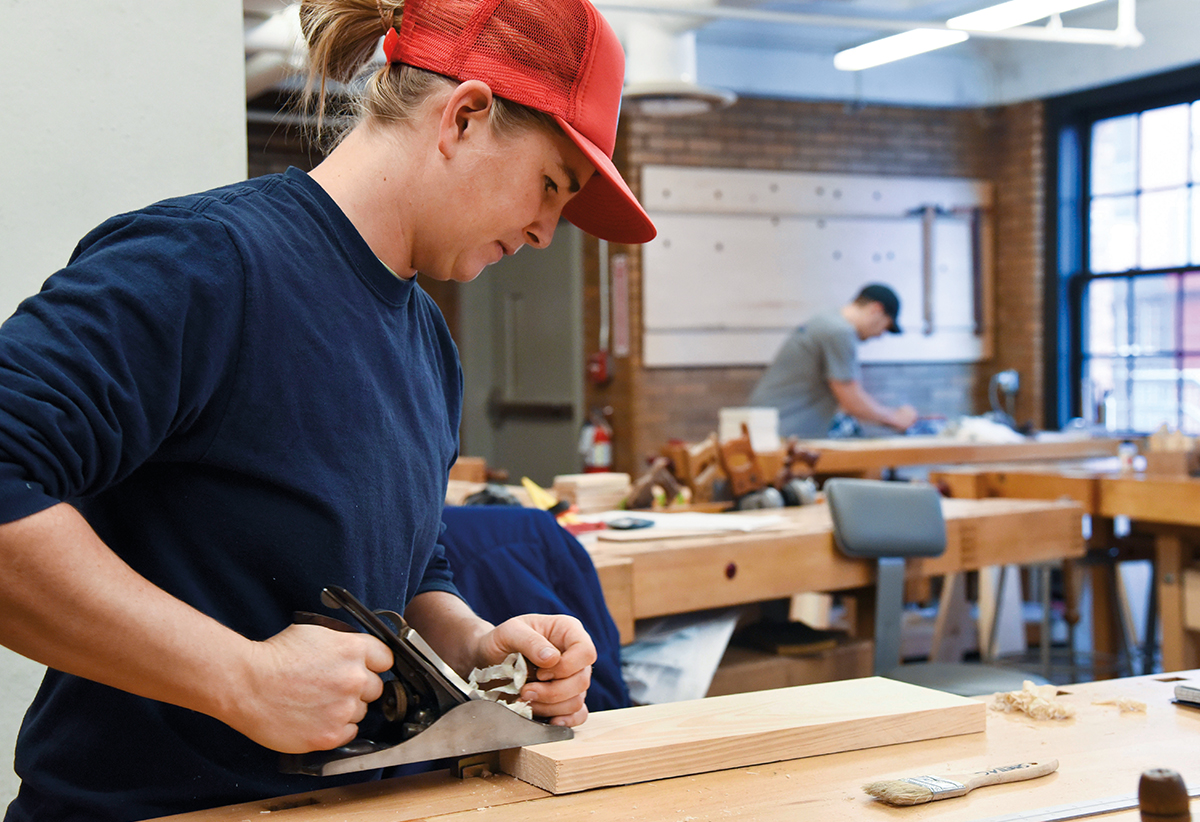 Recognizing the importance of being able to offer its patrons the best seats in the house, the Worcester Shakespeare Company knew it need look no further than North Bennet Street School when it came time to build a “Lords & Ladies” seating gallery for its Jacobean-styled stage.

This past year, Preservation Carpentry (PC) students built a two-story, timber-frame structure—the second of what will eventually be six audience galleries flanking the stage. Using pine timbers, they also framed up a tiring house, a small building that sits separate from the stage and serves as a dressing room or backstage area, according to PC instructor Michael Burrey.

“One of the primary goals of this project is to have modern audiences experience the principles of historic playing. One of those principles involves ‘common light,’ where both the actors and the audience are able to see each other. We perform matinees in daylight as they were originally presented,” explains Mel. “By virtue of the design of the outdoor stage and seating areas, audiences can make eye contact with the actors. They essentially become collaborators in the production.”

In 2003, Michael began collaborating with Mel on establishing the proper period stage for Shakespeare productions.”I’ve had an interest in medieval architecture for many years through my background as a preservation carpenter, mason, and artisan. I first met Mel in London when I was over there to visit the Globe Theatre. When Mel became involved at WSC, he reached out to me. For three or four years, we worked together on constructing a period stage and what’s called the ‘scaenae frons’ or back wall,” recalls Michael.

Wide open to the air and elements, the stage and audience galleries are meant to be put up in July and taken down in August. For the past few years, the stage has been in use at WSC’s current summer home on the piazza space at the old Whitin Mill in the village of Whitinsville, along the Mumford River, in Northbridge. The Lords & Ladies gallery is expected to be in use by summer 2018.

“We’re not building museums or Shakespeare Disneyland. We’re blending the best of the old with the best of the new. I’m so happy to be involved with NBSS. The students are practical scholars and it’s important that we present them the opportunity to relearn something from the past,” Mel shares.

Michael gives the students high marks for their open-minded approach to the project and for what they ultimately accomplished.

“We’re blending the best of the old with the best of the new…. The students are practical scholars and it’s important that we present them the opportunity to relearn something from the past.”

“This was definitely an unusual project for us. The students built theater structures from the 16th and 17th centuries by applying what they’ve learned from their 18th- and 19th-century program projects,” he explains.

“Throughout, the students were focused on the skills they were learning. They seemed to get more and more interested in the overall project as we went along. I think they found it rewarding to make an impact on how modern-day Shakespeare is performed by recreating the viewer’s original experience.”