Opening a Door to the Past 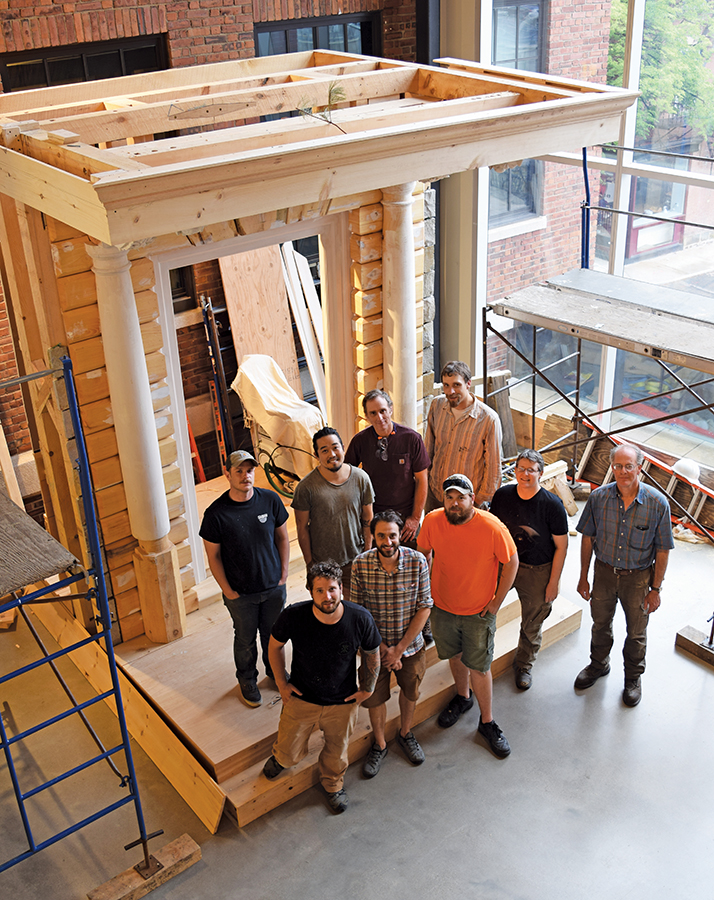 The original front door of the long-gone Hancock Mansion on Beacon Hill recently emerged from storage as the Bostonian Society, its steward, sought to showcase the artifact.

Students from the Preservation Carpentry (PC) program were commissioned to build a full-scale reproduction of the fine Georgian home’s frontispiece (decorative entryway) as part of a historic exhibit on view at the Old State House.

In order to construct the most accurate replica, PC students spent several months studying the house and its history. The research covered documents such as architectural drawings, site photos, and city records, in addition to objects preserved in museum collections, and houses of similar style as the Hancock Mansion.

Steven O’Shaughnessy PC ’99, PC Department Head, says his second-year students were very open to working on such a unique project.

“This was a perfect skill-building opportunity for our students. They learned how to research and document a project, in addition to hand and machine skills like turning wood columns, carving brackets, and constructing timber frames,” says Steve. “Best of all, they got to collaborate with a dedicated, knowledgeable client in the Bostonian Society.”

The respect was mutual, according to Society Collections Manager Sira Dooley Fairchild. “The students of the Preservation Carpentry program are truly artists as well as craftspeople, and the range of techniques they employed for this project were amazing,” she says. “From timber framing to detailed carving, we never ceased to be amazed at their skill.”

After decades in storage, the door was covered in dust and grime. Students used Q-tips and a mild solution to bring out its features, using extreme care so as not to damage the 12-panel door nor hide its historic character—the minor dings and scrapes accumulated through use and age.

Removing the dirt wasn’t the only challenge, however. Recreating the fine details of the structure around the door as it hung on the Hancock house—using just old photographs and illustrations—was also a feat. The team of students spent months working on hand-carved brackets, ten-foot-tall wood columns, and heavy timber frames.

The students of the Preservation Carpentry program are truly artists as well as craftspeople, and the range of techniques they employed for this project were amazing. From timber framing to detailed carving, we never ceased to be amazed at their skill. 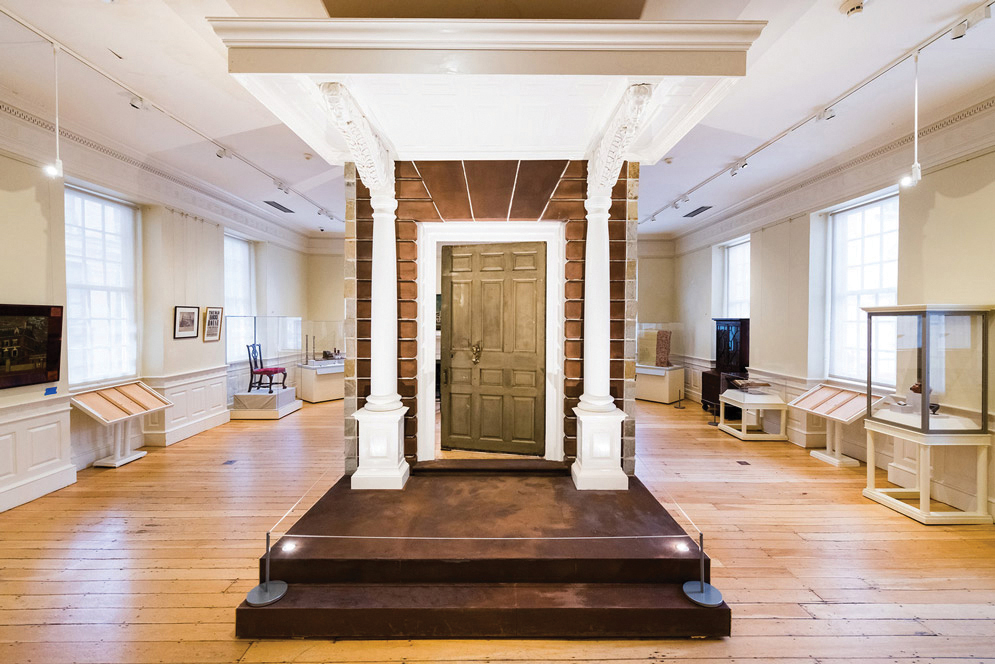 The Hancock Mansion was built in 1737 by Thomas Hancock and later home to his nephew, John Hancock, the first signer of the Declaration of Independence and the first and third Governor of the Commonwealth of Massachusetts. In 1863, 70 years after John Hancock’s death, the house was razed to make way for new brownstone townhouses, with many of its components auctioned off or given away.

The public outcry that followed the Mansion’s demolition helped launch the preservation movement that has seen the Bostonian Society and other such organizations save countless buildings and artifacts, from being lost forever. The door has been part of the Bostonian Society collection since the late 19th century, and exhibited periodically.

This latest partnership reinforced the longstanding relationship between the two Boston institutions, according to Kathy Mulvaney, Director of Education and Exhibitions at the Bostonian Society.

“We were thrilled to collaborate once again with the students, alumni, and faculty of North Bennet Street School. As always, we were amazed by their talent and attention to detail. We couldn’t be more pleased with the work they performed,” says Kathy.

The work continues! The following year’s Preservation Carpentry second-year students began researching and recreating the second-floor balcony, and subsequent cohorts in 2020 have been continuing the work, including detailed balustrade and modillion carvings. When completed, the hope is to display both entryway stories installed together, standing roughly 25 feet tall. Stay tuned for more updates!